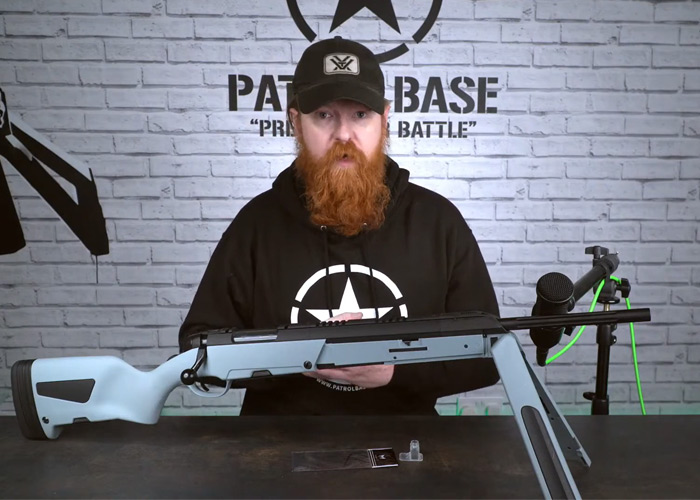 tu goes over the fine details of the ASG Steyr Scout Sniper Rifle made by Modify-Tech that is available at Patrol Base... "The legendary Steyr Scout was designed primarily to be a handy, do it all outdoorsman's rifle, packed with features making it absolutely perfect for the role. Little less can be expected when Steyr Mannlicher, one of the premier firearms manufacturers design a rifle to the specs of Jeff Coopers "Scout rifle concept", widely regarded as a perfect set of requirements for an all-purpose scouting rifle, operated by a lone man or a team of 1-3, prizing accuracy over firepower. Cooper specifies a rifle of less than 1 meter in length, with a lightweight barrel, integrated iron sights, mounting apparatus for a long eye relief scope or a standard rifle scope, less than 3kg in weight, allowing fast reloads and being capable of engaging a man-sized target at 450m with iron sights. Phew! That's one heck of a list, but Steyr managed it, as did ASG/Modify with this beautiful and faithful reproduction.

Starting at the tip of the barrel we can find a thread protector, concealing a male 14mm CCW thread beneath. This allows the Scout to be fitted with tracer units, suppressors, or flash hiders, at the discretion of the user. The threading lies at the tip of the 19-inch aluminium outer barrel, which features fluting at the tip to keep the weight down and push the point of balance of the rifle rearwards, enhancing its pointability and ease of carry. As we reach the stock, we can observe the upper handguard of the rifle, a feature generally left out of Airsoft sniper rifles due to their design. In the case of the Steyr Scout, this features an integrated adjustable flip-up front sight blade and an extended Picatinny rail for mounting long eye relief scopes. The provision for mounting such scopes is a crowning feature of the scout rifle concept, with the use of a long eye relief scope allowing a lone operator to keep his peripheral vision free to scan for sudden threats at close range. Below the upper handguard, we can find the polymer chassis, which includes an integrated Bipod. The bipod is deployed using the large button in the center of the fore-end of the stock, and provides a basic but handy way to rest your rifle without adding any additional weight to the front end of this handy package. When the Bipod is deployed we can find the slider used for large adjustments to the hop, which is present on both sides of the rifle and adjusts with a tactile and audible click, a very nice feature for adjusting in the field. These sliders work in conjunction with the TDC adjuster, found on the upper rail of the rifle above the magazine well, which can be used for fine adjustments once the slider is set. This unique feature will make Airsoft sniping considerably easier and allow you to get the absolute best in accuracy and range from the Steyr Scout. On the bottom of the chassis we can also find one of many Steyr QD sling points present on the rifle, and a bipod rail, meaning with the appropriate adaptor you can mount any bipod you choose. Behind the bipod rail is the magazine well, which houses the 32 round magazine. The side of the chassis features ergonomic handguard plates which make this rifle a true pleasure to hold, giving it a roughly triangular profile, allowing a firm hold of the rifle in any weather condition. As we move rearward we will find two more Steyr QD sling points, one on either side and the dummy magazine well, featuring a dummy mag with storage inside for tools, BBs or a bag of tactical skittles. The receiver on the Steyr Scout, both real and Airsoft, is machined from aluminium and helps keep the rifle lightweight. Across the top of the receiver we can find a Picatinny scope mount, useful if you chose to use a standard sniper scope on the Scout. Within the receiver is the steel high-volume cylinder finished in gorgeous gunmetal, providing some contrast to the black parts and avoiding use of the shiny chromed cylinders found in other Airsoft sniper rifles. This high-volume cylinder also enables this rifle to be tuned to a ridiculously high muzzle velocity with no additional upgrades required. The upper receiver also houses the flip up rear ghost ring sight, which is of excellent quality. Looking down this rifle with the sights deployed makes me want to skirmish it with only iron sights when I get mine. The sight base is long and the ghost ring sights provide a great balance between precision and field of view, an essential characteristic for a scout rifle. The bolt handle of the Steyr Scout is an enlarged type, making it easy to find and easy to keep hold of during strings of rapid firing. The trigger has a beautifully light and consistent pull with about a millimeter of take-up before the rifle goes off, reducing the likelihood of jerking the trigger and pulling the shot off target. The trigger is of a comfortable, curved design and feels nice under the finger. The rifle's stock features a semi-pistol grip design, with the angle being slightly more vertical than a traditional rifle. This enables more rapid transitions between targets when snap shooting whilst retaining the comfort aspect of the traditional rifle grip when operating prone. Within the stock is another storage compartment, with enough room for a spare magazine, speed loader or two bags of tactical sweeties. At the rear of the stock, we can find a rubberized ergonomic butt plate, together with two stock spacers for adjustment of the length of pull. This helps keep the rifle firmly placed upon the shooters shoulder, and allows adjustment to fit any body type or any loadout featuring body armour. Additionally, there are two more Steyr QD sling mounts on either side of the stock.

Internally, this rifle is upgraded and rated to handle M190 springs, enabling it to shoot a maximum of 625 fps! Obviously, this is way too hot for skirmishing in the UK, but is a testament to the high-grade internal components used by ASG in the Steyr Scout. The internals features a Steel 9mm spring guide and reinforced trigger sears, ensuring the setup can handle high velocity if you decide to upgrade the spring. The high-volume steel cylinder features a silent cylinder head, and within there is a piston head with an airbrake and a metal cylinder with rotating rings, ensuring your set-up runs as quiet and smooth as it can be without a suppressor. The bolt pull on this rifle is remarkably smooth and light for a rifle shooting above 400fps, this being down to the precision 'Modify' internals, a brand known to Airsoft snipers as the absolute cream of the crop. As mentioned previously, the HOP unit features dual adjustment, meaning you can set the sliders beneath the bipod and fine-tune the TDC adjustment screw to achieve the absolute most efficient trajectory possible. The HOP pre-installed is optimized for 0.36g BBs or higher, making this a true sniper rifle out of the box. This allows the user to take advantage of some of the target grade BBs available in higher weights and experience the true potential within the Scout.

The Steyr Scout has found its way into several video games over the years, primarily due to its cutting-edge design and modern looks. Famous for its role in the Counter-Strike series, Left4Dead, and Tom Clancy's Rainbow Six: Vegas series, the Scout is a known rifle for those of a certain generation, and to all the others, you should get to know this rifle as you really are missing out!"