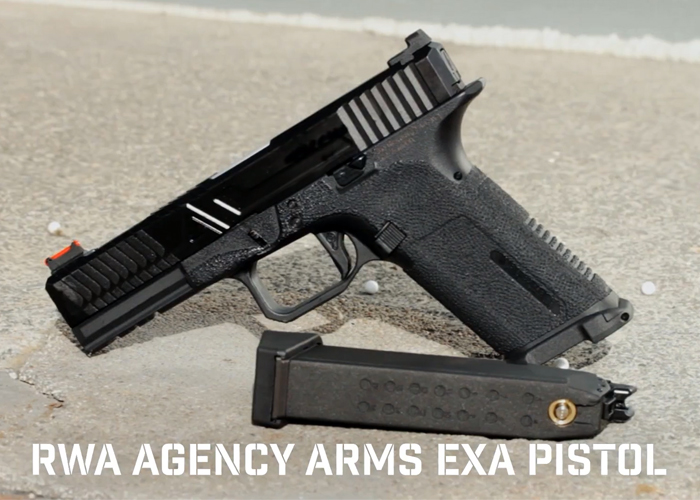 At first glance, the EXA impresses with the "EXA Hybrid Slide Cut" by Agency Arms, a ribbed outer barrel in the center line and a blackened inner barrelfor added realism. Quite unique to the look of the EXA is how the slide and outer barrel are flush with each other, rarely seen on other pistols! It also includes Lone Wolf's signature Timberwolf frame, made to the agency's specifications. From the factory, the pistol comes preloaded with a fiberglass front sight and a blackout front sight, allowing for a cleaner sight image that gives you the visual consistency akin to a standard red dot optic.

Aside from the above features, the EXA pistol features the Syndicate adjustable trigger which is new to the RWA Agency Arms range. Along with Syndicate branding, you can fine-tune sensitivity and pickup. Out of the box the trigger is solid and responsive with a very audible and positive reset. The trigger break is clean and running shot after shot further solidifies it as a quality custom trigger. For those who want control over every aspect of the shooting experience, this crisp trigger really takes it to another level.

As mentioned, this is a fully licensed Timberwolf frame from Lone Wolf Distributors, and on the surface of it, it already shows significant differences from the basic Glock frame. Initially, it features a straighter grip angle for a more natural grip and a higher beavertail to better mitigate recoil. Agency Arms went a step further and had it modified to their specifications. The frame seen on the EXA pistol features the signature accelerator cuts forward that act as a thumb rest for better recoil control, and the reversible magazine release makes this pistol suitable for both left- and right-handed shooters.

The faux stippling seen on the EXA pistol is called "Shark Scale" and probably offers one of the best out-of-the-box gripping experiences seen on a pistol of this type. Additionally, the frame offers the ability to swap out its back straps for a more customized fit for shooters more comfortable with 1911s, XDMs or SIGs. It's no surprise that many True Steel Glock users are switching to the Timberwolf frame!

The Agency Arms EXA pistol's magazine comes with a bumper that provides two extra rounds of capacity in the real steel world. On this airsoft pistol, it's purely for aesthetics, but can provide your magazine with basic protection from the elements and potential fall damage. Magazine reloading is very smooth as it is designed to work seamlessly with the low profile magazine that comes preloaded with every EXA pistol. You can also enjoy this ease of use with some other magazines that are compatible with the EXA, such as. B. Magazines from Umarex / VFC Glocks and magazines from the TM G series (not quite 100% suitable, some smoothing is needed with TM magazines)."