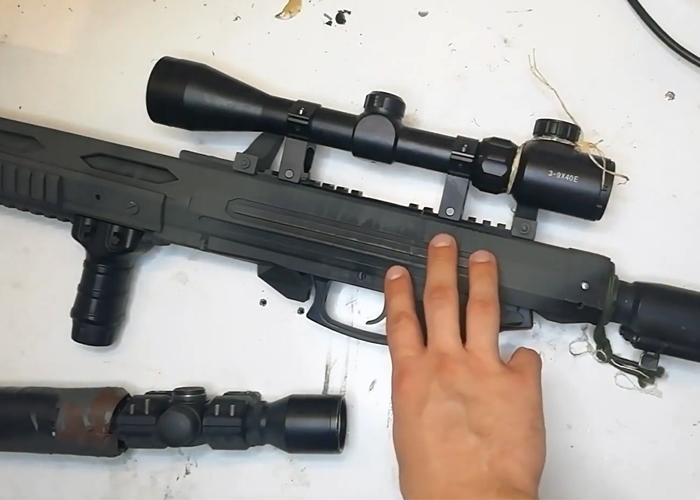 Fulcrum reviews a 3D Printed MK23 SOCOM CCK which is available to download from Thingiverse... "Finally got around to doing an airsoftreview of the 3D printed MK23 Airsoft Assassin Carbine Kit which I've used several times on this channel. It's a brilliant little airsoft gun, perfect for covert ops under the enemies nose. In fact I've nearly been trodden on several times playing with this airsoft pistol carbine kit!

Now, you cannot beat the Tokyo Marui MK23 SOCOM airsoft NBB handgun when it comes to stealth. It's one of the quietest airsoft guns ever made and not only that, there are plenty of upgrades and aftermarket bits and bobs for it. But the old man wanted to make a DMR based around the TM MK23, so he had a look online and found plans for a 3D-printed airsoft carbine kit for the MK23. We then printed it (took roughly 3 days and used approx. 170 metres of filament) on our Ender 3 3D printer. The print finish wasn't bad considering how new we were to 3D printing at the time, albeit with a little under extrusion in some areas. The carbine went together with a few nuts and bolts, along with the old Specna Arms HK416C stock and just like that we had a MK23 pistol carbine.

Of course, the #3dprinted MK23 pistol carbine wasn't exactly an airsoft DMR. The muzzle velocity was just over 300FPS which is below the typical "general purpose" 350FPS UK velocity limit. However we decided to have a go with it as it was rather than fiddling with valves to increase the power. I found that this lower velocity had a massive benefit; no minimum engagement distance. Aside from the much-detested "Bang" rule, we could use this carbine as close as we liked. Which helps in closer range engagements as it saves you from having to switch to a sidearm, creating movement which can easily give you away. However, the lower power of this MK23 airsoft build does force you to stay away from the typical longer range engagements DMRs are intended for. And of course the MK23 is double action only, so getting into direct gunfights with ARs and SMGs would be madness. This type of airsoft gun is best used in the sweet spot between. It's better suited for accurate, single shots than an AR or SMG, yet it weighs less than a DMR and crucially is a lot quieter than most #airsoft DMR builds.

This interesting midpoint requires you to be a little more covert than other loadouts. It is vital that you land the first shot and you avoid getting into engagements which will compromise your position. Conveniently, since this airsoft carbine kit is so lightweight and low profile it's easy to move around with. Making repositioning and holding yourself into unusual stances much less fatiguing.

It's certainly an interesting style of play and I've enjoyed being able to sneak right up on the enemy and cause confusion with random, yet precise and almost inaudible shots."