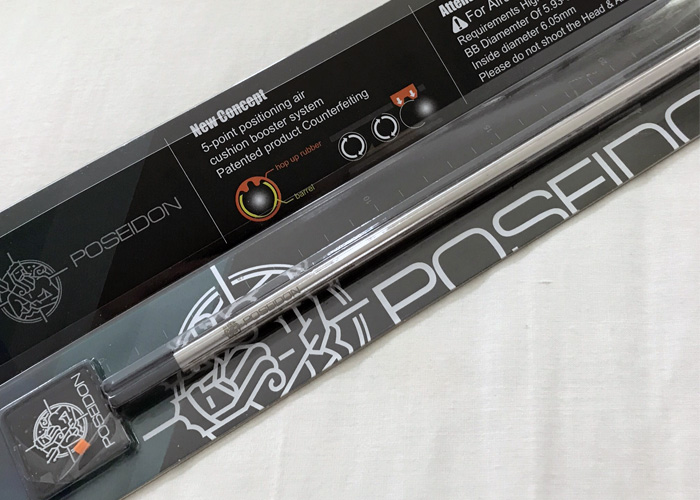 Upgrading your airsot rifle is part and parcel of playing the game. To get your airsoft rifle to shoot better, straighter, further, and more accurate than anyone else without going over the muzzle velocity limit is the goal of most if not all experienced airsoft players. Airsoft companies know this that is why the market is saturated with tons of upgrade kits and parts and they all promise to do the same thing... make your airsoft rifle shoot better.

Internal upgrades range from all sorts of things like gears, hop-up units, pistons, nozzles, or to make the story short, everything you can find inside the gearbox has an upgraded version of it.

Now, we all know that airsoft works with air and the backspin that the hop-up unit gives the BB and how air pushes the back spinning BB out of the barrel. I am not an airsoft tech but from my experience with airsoft, it is important to control the air that is pushing the BB out. I have been told when I started upgrading my airsoft rifles that muzzle velocity or what is conveniently referred to as the FPS of your airsoft rifle and the distance of how far your rifle can propel the BB are not directly related. Meaning it doesn't mean that by increasing the muzzle velocity will equal an increase in firing distance. And this is proven time and time again by the Tokyo Marui airsoft rifles.

Controlling the air coming out of the gearbox is not impossible to achieve and any experienced airsoft veteran knows this. You need certain ingredients to achieve it though. For me, the number one factor to get a good BB distance travel is to minimise air leak. People achieve this in different ways. One is making sure the gearbox is tight. Another is making sure that there is none or minimal air loss between the nozzle and the hop-up assembly. And finally using a precision tight bore barrel to prevent air loss around the BB. To make it simple you want all the air coming out from the gearbox to stay behind the BB and push it out of the barrel.

Inner barrels are an integral part of an airsoft rifle. They can make or break your rifle’s performance.  Factors such as barrel length, bore size or diameter, quality of manufacturing, smoothness and even the type of material used. The most popular barrel upgrades are the tight bore barrels with a bore diameter of 6.03 to 6.01mm. Although wide bore 6.23mm barrels are also used depending on the set up of the airsoft rifle.

Our friends from Gunfire in Poland are now stockists of the Poseidon 6.05mm precision barrels with the air cushion booster system. It has an air track design which in theory creates an air cushion underneath the BB as it travels along the barrel. This air cushion rolls the BB on top of the barrel thus maintaining the backspin generated by the hop-up. This in turn will stabilise the BB as it exits the barrel giving it a longer travel distance. 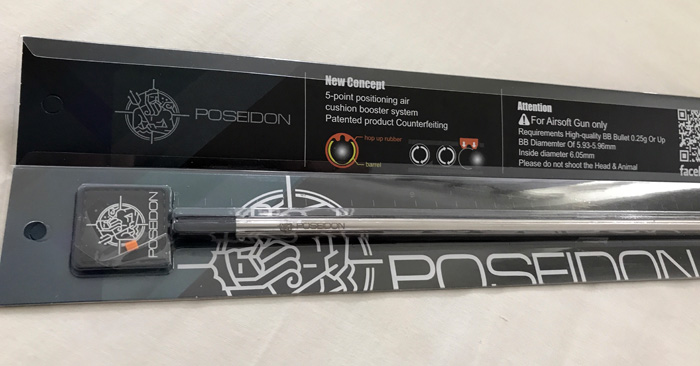 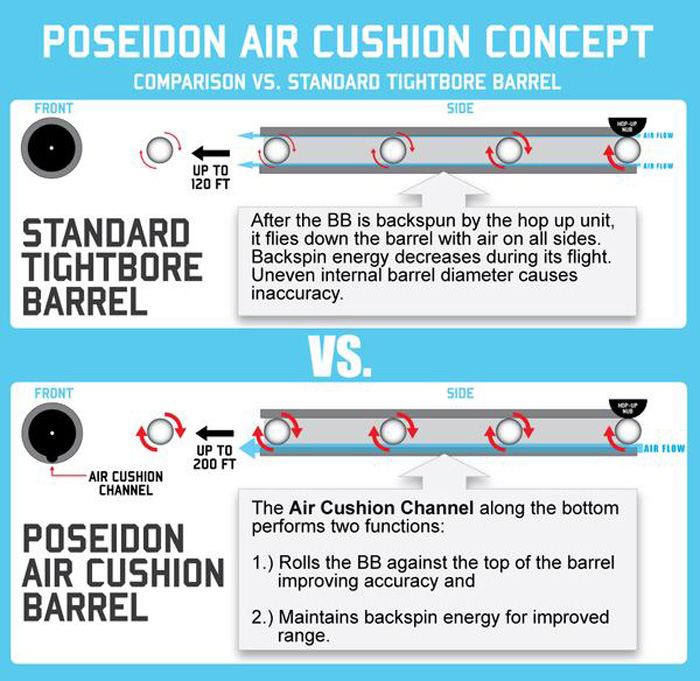 The Poseidon barrel package includes not just the barrel but also the hop-up bucking and the hop-up nub. The barrel quality looks very well made and good quality materials were used in making it. Inside of the bore appears clean with very minimal residue. I would still recommend cleaning the barrel before installation as with any inner barrels. The hop-up bucking is also of good quality and the material is stiff. 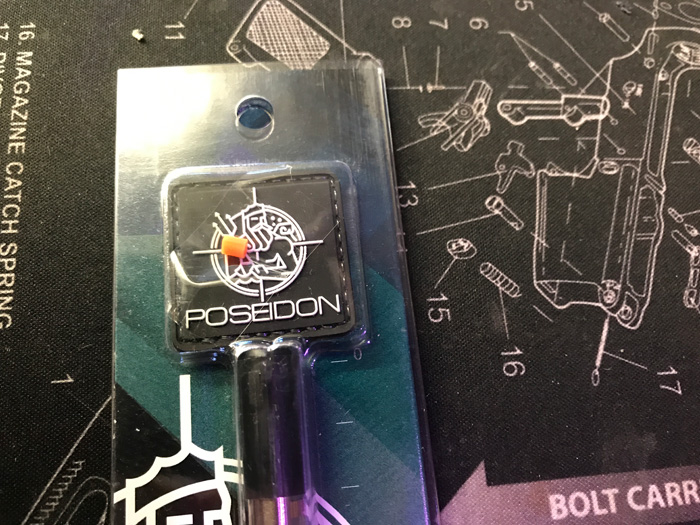 The Poseidon packaging says that the barrels are for AEGs, thus I will be testing the barrel on an Evolution Airsoft TangoDown M4 AEG. I am also doing a review of this AEG and the muzzle velocity is very consistent at around the 330fps due to its integrated MOSFET. So I felt that this will be the best AEG that I have in hand to see if the Poseidon barrel would make any improvement to the performance of the TangoDown M4.

Now, Gunfire have sent me 2 barrels so I installed the other one on my Tippmann HPA rifle. Players who have experience with the Tippmann M4, know how temperamental this airsoft rifle can be. The muzzle velocity can be all over the place up to a variance of 10fps +/- . Now, since the Tippmann takes AEG barrels I thought it would be the perfect HPA platform to test the Poseidon barrel.

The packaging also indicates that for best results heavier BBs should be used (0.25gm and heavier). 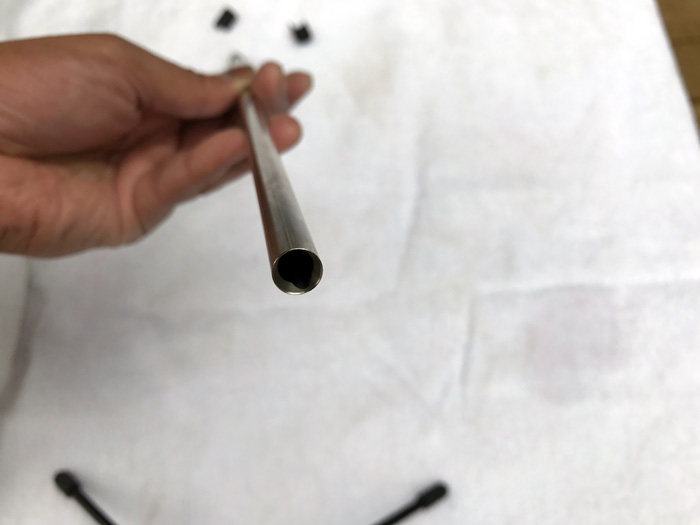 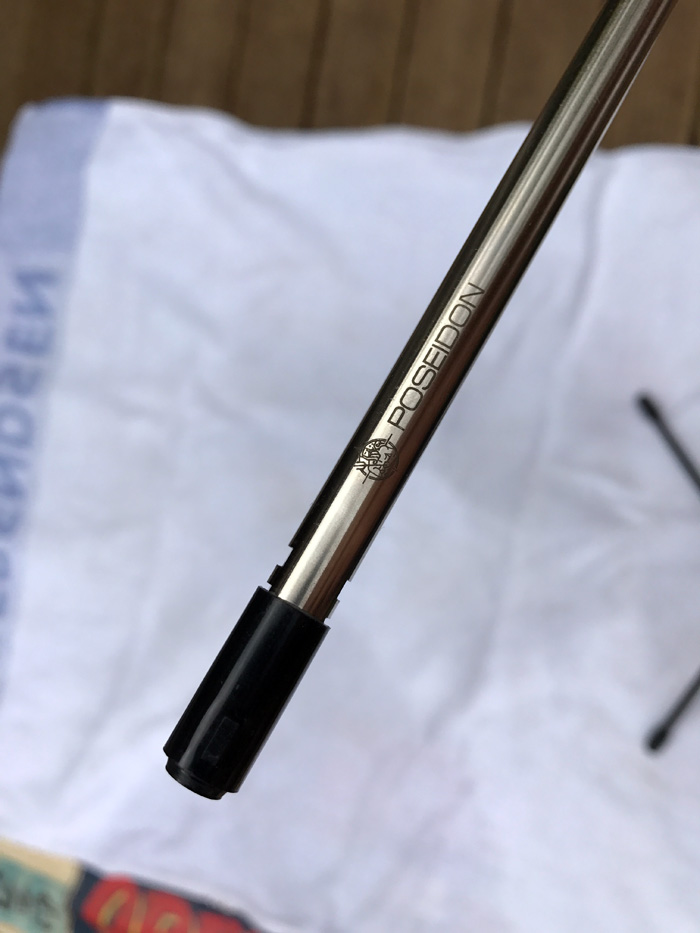 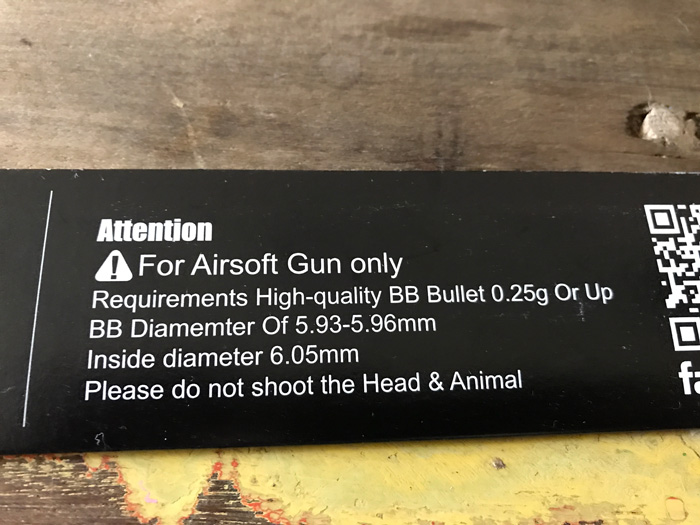 The TangoDown AEG is pretty much a standard M4 AEG apart from it quick-swap spring and integrated MOSFET. I did think that this AEG will be a better option because of its MOSFET which gives it a more stable muzzle velocity.

With the chrono test, the TangoDown as expected, fires at a very stable muzzle velocity of 330fps +/-. This is a brand new AEG, thus, the stock hop-up unit is still bedding in but still performs very well achieving a shooting distance of just under 60 metres.

With the chrono test using the Poseidon barrel, the TangoDown lost about 10fps reading at the low 320fps mark. This came at a bit of a surprise so we went online to see what stock barrel the TangoDown has and we found out that in came with a 6.03mm barrel out of the box.

Range and distance with the Poseidon barrel is almost the same shooting at close to 60metres. The major difference that I noticed is that the shots were more accurate with little hop-up adjusting done.

My Tippmann is pretty much how Tippmanns are. It is a bit temperamental. I have been able to make it behave with aftermarket upgrades but still can misbehave every now and then. It fires at 350fps+/- on 0.2gm BBs but as every Tippmann M4 owner knows, it never works on light BBs so I will use 0.3gm BBs.

Now back to the chrono, the Poseidon barrel had a lower muzzle velocity reading of around -10fps compared to the tight bore 6.03mm barrel that I had previously. I expected this result as I am going back to a wider bore barrel. On shooting at an approximate distance of 25 to 30 metres, the Poseidon barrel performed as well as the stock barrel and achieved a similar maximum shooting distance of 60-70metres like the installed Poseidon Barrel in the TangoDown ECR AEG. Unfortunately, I was not able to use the Tippmann on actual gameplay as the weather on the weekend I was doing the testing was too hot that it affected HPA RIFs. 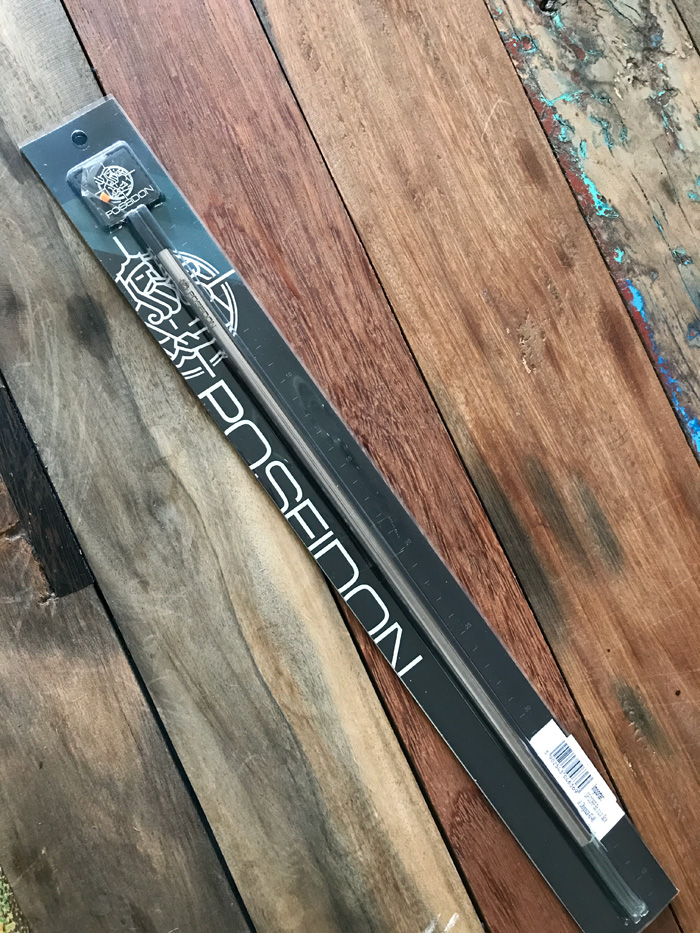 The advantage of having a wider bore barrel as compared to a tight bore inner barrel is that this is more tolerant to different BB grades whereas tightbores require more polished and smoother BBs to avoid the potential of jamming. With the wider bore barrel, at least you can use different types of BBs with lesser problem of jamming. The wider Poseidon inner barrel can be as accurate as a tight bore one and thus, for those who want better performing wider bore inner barrels for AEGs, then Poseiden can be a good choice.

It would be interesting to compare the Poseidon with the other wider bore barrels such as the stock Marui 6.08 inner barrels and the even wider Orga barrels in the future.

Many thanks to Gunfire for the Poseidon Inner Barrels.