Airsoft MOSFETs have, in the past few years, been very popular to airsofters. They don’t just enhance or improve the trigger response of AEGs but also provides extra functions for the airsoft guns.

In my previous review, we had a look at the Perun G&G ETU replacement unit. In that review I installed it to my ARP9 which gives it the extra features than what the ETU has. Since the ARP9 already has a pre-installed ETU, I didn’t really see the significant benefits with the Perun ETU apart from, obviously, the extra features. So with the V2 Optical MOSFET, I wanted to install it to an AEG that did not have a pre-installed MOSFET or ETU but I also did not want to just install it on a normal or conventional AEG with a V2 gearbox. So I asked for the help of my good friends from ROE Airsoft and see if they can suggest something. 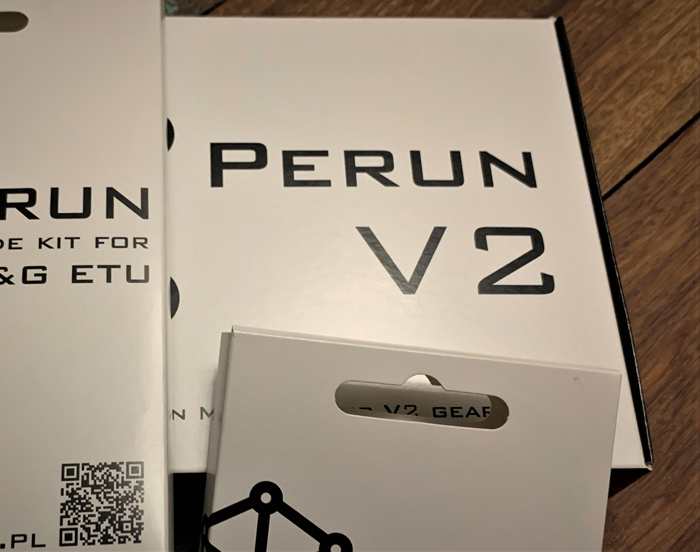 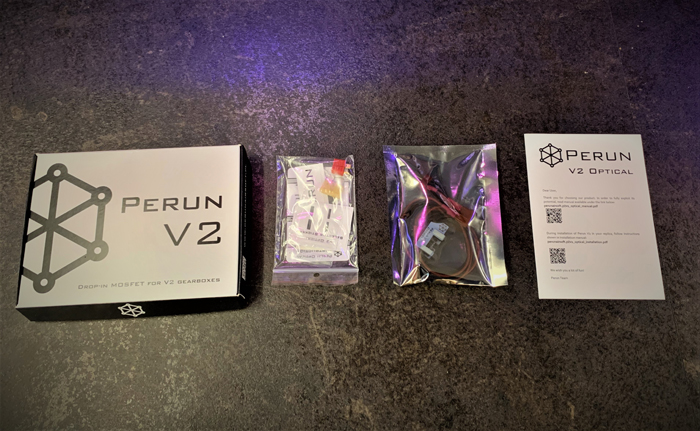 The idea I had for this project was to d a DMR build since the MOSFET can be locked to semi only firing mode. We had a good look with what was available to use and we have decided to use the “Warlord” AEG from Dynamic Tactical (Dytac).

The Dytac Warlord is a pretty awesome looking AEG. It utilises the V2 gearbox and has that AR/M4 look but on close inspection it has its own unique design.

Ethan from ROE Airsoft kindly agreed to install the Perun Airsoft V2 Optical MOSFET for me. I did mention this to him in advance so he made his own research on installation and programming. When I got to ROE HQ, he was well-prepared and ready for the task at hand.

Once we have decided which AEG we were going to install the MOSFET, Ethan started breaking down the Warlord. The Perun MOSFET is designed to be installed into a V2 gearbox. It replaces the mechanical contact within the trigger mechanism which hugely minimises the wear in this part of your replica. And by using electronic circuit based on MOSFET transistors also enables the addition of new features and functions. 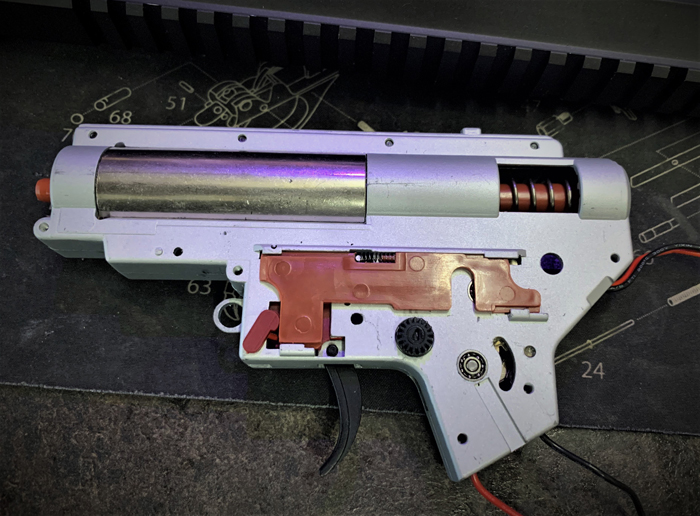 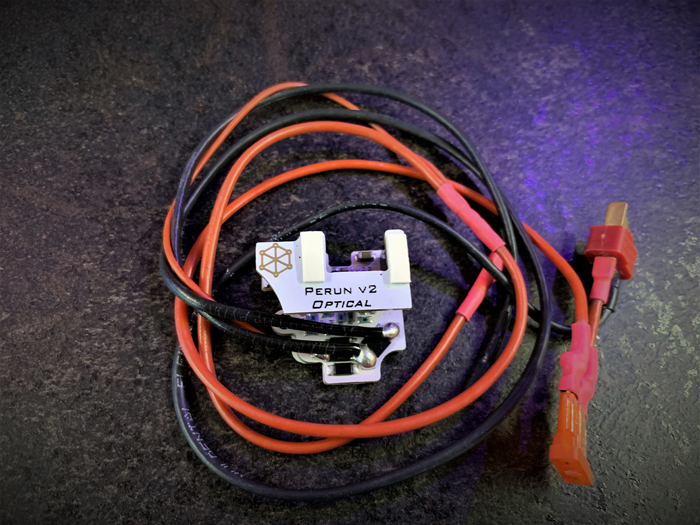 Installation of the Perun V2 Optical was pretty straight forward and is mainly centred on the trigger mechanism. There is no soldering needed and it uses the screws that were already used in the gearbox. Once installed, there are some black stickers that need to be placed along the underneath of the gearbox where the trigger comes out to make sure that no unnecessary light goes in and affect the optical feature of the MOSFET. There are also stickers that need to be placed on the underside of the fire selector plate. There are videos in YouTube that show exactly how this is done. 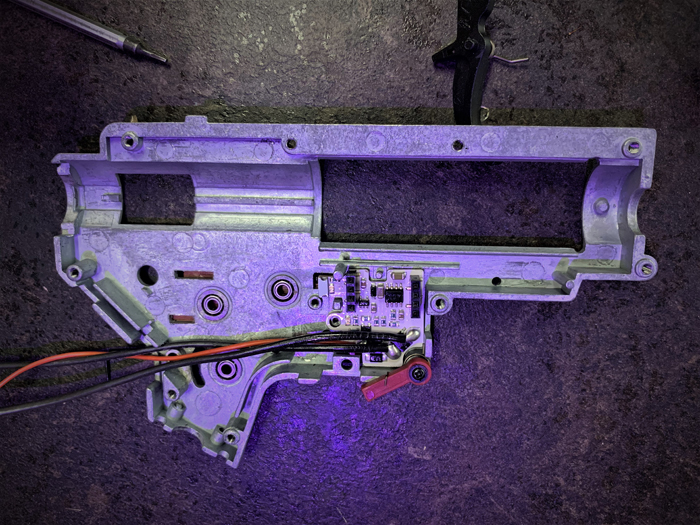 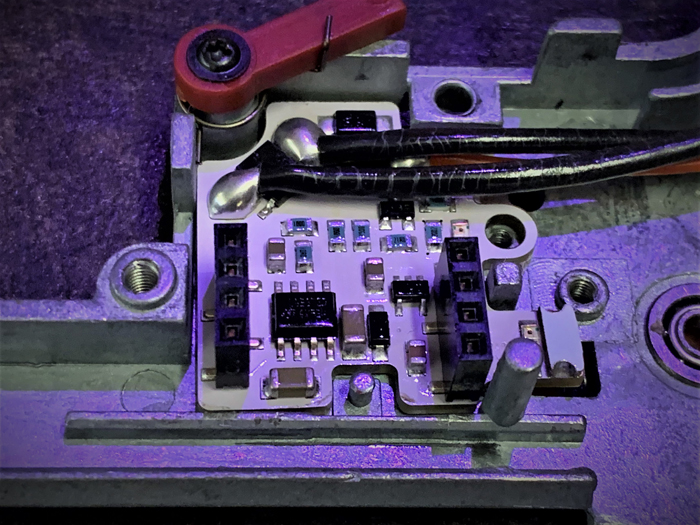 Same as the Perun G&G ETU, the pack comes with a card that lists the different functions and how to program the Perun V2 Optical.

The MOSFET can be programmed to shoot semi or full auto fire as well as 2 to 5 bursts fire. It also features a double-shot mode where the gun will shoot when the trigger is pulled and when it’s released. 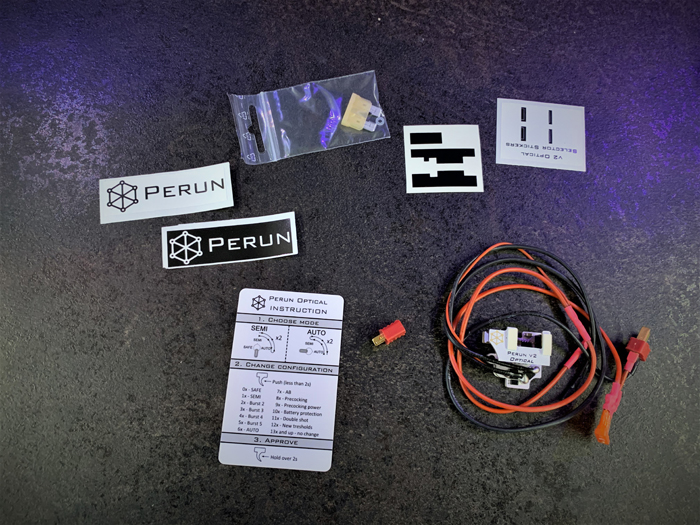 It also has an air brake system which stops the motor and for battery protection. The air brake feature will stop the motor preventing double firing in high ROF settings. The battery protection on the other hand works with Li-po batteries. When the battery power goes below a certain level, the user will hear a sound warning of a low voltage output.

But what I think is the best feature of the Perun V2 optical which can also be found in other MOSFETs is the pre-cocking feature. Pre-cocking is what it says in the label. It pre-cocks the piston giving you a very responsive trigger. Very useful in CQB battles or for me I prefer it with a DMR set up. The pre-cocking feature will work in semi, full auto and burst mode.

Comparing the performance of the same airsoft rifle with and without the Perun V2 Optical, it shows a big difference in ROF and trigger response. Programming is really easy as this is done via the trigger so the MOSFET can be set on the go.

Ethan kindly took some videos to clearly show the comparison between the Warlord without the MOSFET with the one that we upgraded. It is very obvious how much improvement the Mosfet has given the AEG. 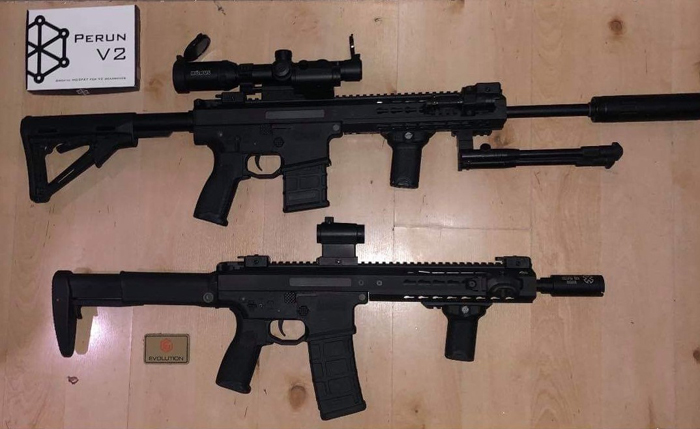 I mentioned on my review on the Perun G&G ETU that I did not feel the necessity to replace the standard ETU as I did not really feel the difference in the trigger response although I did admit that the extra features were a very nice addition to the replica.

With the Perun V2 Optical being installed to a non-MOSFET AEG, the story is very different. The thing is there is no comparison, in my personal opinion, between the two. One thing I hate with standard AEGs is the lag that you get from the trigger pull. It’s as if you can feel the piston being pulled back and then finally firing. With a MOSFET installed and your AEG properly set up, you almost take away that. The firing is very crisp and instant especially with the pre-cocking feature. It just gives you that feeling that you can rely on your replica to fire a shot the instant you want it to. And the other features are cool to have.

I know that a lot of players will say that most MOSFETs of this kind will do all of these anyway. Yes, I agree to that as I use other MOSFET brands for my other AEGs but to get the same features for a more competitive price then I think it’s worth a try.