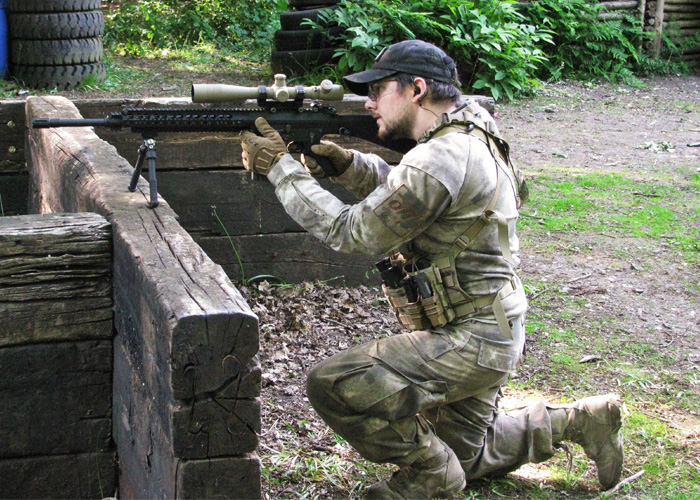 Following my recent incursion into the Designated Marksman Role (DMR), I was after an optic that would not just be true to the essence of the role itself, but also, it would have some history in common with the M110 Semi-Automatic Sniper System (SASS) I’m using  at the moment (the Ares Airsoft version).

So going back to the M110 SASS history, I needed to find a replica of the Leupold Mk4 3.5-10x40mm, which was issued with every M110 along with some other goodies, such as a suppressor and a night vision scope that would integrate with the existing MK4 scope.

When looking around I found the JJAirsoft 3.5-10x40 MK4 style scope/replica which does pretty good justice the real steel scope, since it looks badass too.

The JJAirsoft scope is a very close replica of the Leopold optic and fits the bill in term of the look. Well, they don’t sell the anodized dark earth version yet, which would be even closer, but they do make them in Tan, just like the one reviewed here, and Black.

The build quality is brilliant, being that the main body of the scope, or the cylinder, is built from an extremely sturdy metal that JJAirsoft doesn’t specify if it is Aluminium or another type of metal.

Anyway, the quality is also noticeable on the weight so running around with this scope and a DMR will most likely give you a good muscle training since it weights around 700 grams!

Like most JJAirsoft products, just by touching it you will feel what a solid piece it is. Plus the tan coating not only looks great,  it is also extremely durable and scratch resistant which is a great sign since this scope is a considerable investment to make. Apart from this, all turrets, dials, and knobs work flawlessly and every part fits nicely together without any wobbles or gaps. The whole optic is just a pleasure to look at!

Even the included mounts are extremely sturdy and secure well the optic in the rails. And most important of all, they are extremely easy to mount and unmount thanks to the generously sized screws.

That takes me to the included Allen Key, which is all you’ll ever need to secure your scope to the included mounts, which by the way are painted in the same colour as the scope; so that’s a nice touch. Once fitted, you can just go ahead and mount them on any 20mm rail using the small knobs that are really easy to tighten using just your hands, so no need for tools there. Also included with the scope are the plastic lens caps that help to protect the lenses when transporting the scope mounted on your AEG, and since these are flip up caps, you don’t need to remove them when playing, being that you just flip them up to play and  flip them down afterwards. I found that the caps fit extremely snug, unlike some caps that fall off easily and can get lost during games. These will stay in place since they have a tight fit to the scope, which is great since it saves the hassle of having to go looking for them in case they come off.

The other accessories you see in the photos such as the Kill Flash (or ARD) and the short (7cm) and long (12cm) scope extenders are optional and you can get them for a relatively low cost from Airsoft Cart. I would strongly advise you to get the Kill Flash as this not only reduces the  glare produced by the coated lenses dramatically, it also protects the lenses from incoming BBs and other natural dangers such as tree branches, rocks, etc. very well. Installation of the ARD is quite simple since you just have to screw it to the scope that is already threaded in order to receive the ARD or the extenders. Operation-wise, this could look like a very complex scope to use with all those knobs going on. But really, it’s quite easy to use and you’ll be glad that you have all those options: If you look closely, there is a thin ring that allows you to focus depending on your eye needs and improve the eye relief; it’s easy to use and works great.

The first knob, closest to the “peep hole”, is where you can turn on the illuminated reticle, which can either be red or green. Then you can use one of the 5 brightness levels, which I will go into more detail below. The battery is located under the cap that is used to adjust the illumination and has an O-ring to protect it from water and debris that might get in contact with the electrical components. At the middle of the scope there are a two very easy to adjust knobs that change the position of the crosshair in terms of windage and elevation. I simply love how easy and clear the adjustments are made, simply turning the knob in small and clear click increments. It’s really soft and the feedback is crisp and clear, making it ever so easy to adjust and zero in the scope quickly. I think that this is the replica optic made for airsoft  was able to adjust in the shortest amount of time! There is a third knob, located on the left, which was a mystery to me but I’ve found out to be really useful, as it corrects the parallax error on the sight. This means that you can correct any parallax (the crosshair floating around the object you want to shoot when you move your head, but you don’t move your gun), from 75 yards (68 metres) to infinity, making the reticle remain on target once you get it to the correct distance your target is at.

The reticle is nicely defined and crisp. You can easily see the dots on it, and it’s really fast to adjust it using the windage and elevation knobs I mentioned earlier, without taking my eye off  the sight. Itr is just brilliant! I did find that the illumination wasn’t distributed evenly on the crosshairs as it was slightly brighter on the left than on the right. Honestly, for me this is no issue as I don’t usually like to run this type of scopes with illumination. But if comparing to the real steel one, you’ll see that only the central bit or core of the cross hair becomes illuminated, whereas on the JJAirsoft scope, the whole crosshair is illuminated. I think that if only a small portion of the reticle was to get illumination, such as the real steel one, I would probably end up using it more often, since I think that all that illumination takes my focus away from the centre of the image.

The crosshair is also slightly different from the real steel version, but that’s not a bad thing since it is still very easy to use. Apart from that, the 40mm diameter lenses are wide, very clear and crisp with the eye relief at 3.5x times is quite good. Of course, as soon as you start increasing the zoom the eye relief is a lot less and I sometimes find myself squinting and trying to find the best position since there is a significant difference between 3.5x and 10x.

The picture is still quite clear and crisp at 10x but suffers a slight but quite negligible loss of definition.

In the field I did find myself using mainly the 3.5x magnification and using the 10x only occasionally when I wanted to confirm that the BBs were really hitting an opponent. I also used some in between magnifications but most of the time I just use it with 3.5x which is the sweet spot for me!

I was after a scope that would be a close replica to the Leopold MK4 3.5-10x scope; and that should sturdy and reliable.

I got pretty much what I was looking for and even more, as the JJAirsoft scope is very easy to use, has a very nice price tag and is very well-built though on the heavy side!

Also, really liked the included accessories such as the flip up lens caps and the mounts. These make the scope feel like it’s really premium as compared to other Airsoft scopes.

If you’re looking for a great scope for your sniper gun or DMR AEG, this is a pretty darn good option!