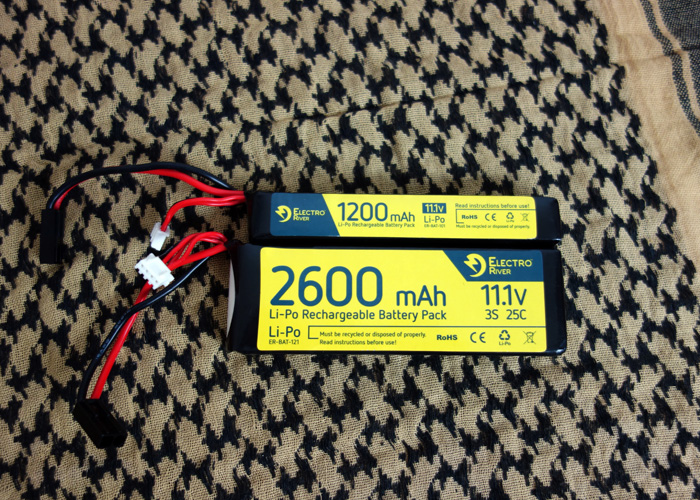 Lipo batteries can be very nice, especially if we’re talking about 11.1v Lipos which just increase the ROF (rate of fire) in most airsoft guns like crazy thanks to their high voltage. But at the same time they can be very temperamental and hard to manage. Especially if you’re not hands on, and a bit sloppy with your stuff, forgetting to give it a good charge after each game or simply by not getting a Lipo alarm to avoid the complete discharge and likely demise of your Lipo battery.

Electro River batteries don’t promise to solve all your Lipo woes and issues, but at least they care about them and have some interesting features and technology that help manage these very cool but rather demanding batteries.

FEATURES AND THINGS IMPORTANT TO KNOW ABOUT

SubZero and Nanosafe are two technologies that make these Lipos more interesting for Airsofters, but also more usable and safer. The Subzero technology allows the battery to keep performing normally at very low temperatures, which would be very welcome during winter time. As for Nanosafe, this has to do with making the usage and charging of the batteries much safer, thus minimizing the risk of combustion which can occur when you either overcharge the battery or let it discharge and get below the optimal 3V.

The battery also has quality wiring that will last longer and is very reliable. So all that juice is safely transferred to your motor and you’ll have less chances of shorting your electrical system.

Of course, that it’s still a Lipo so you need to take care of it as usual, and balance it every time you charge it, not let it fully discharge and not charge it with more voltage than the required or else you can permanently damage the Lipo. Also, don’t forget that these batteries discharge on their own, so give it a good charge every 2-3 weeks and balance it so you avoid a full discharge which is way worse than charging the battery several times.

But really if you do this, you’ll probably get a very good life span with these batteries and most important of all that snappy trigger response and amazing ROF!

I’m currently reviewing a very nice DMR, and I wanted a lipo that would last me the whole day while pulling a very strong spring that outputs around 400fps. Surely an 1100mAh battery isn’t enough, especially when this particular DMR has a MOSFET and a high torque motor fitted. Since this setup increases the fire power of the gun, the more it becomes demanding to the battery, so no 1200mAh battery would cut it. Hence, the big Lipo pack that would do the job is the 2600mAh which is a huge battery that I was curious if it would fit the stock on this DMR. And it did! Plus, it did last the whole day from 9:30h to 17:30h during 4 or 5 games we played. I couldn’t be happier and this is now part of my arsenal!

Also, when I pull the trigger of this gun with this particular battery, I go to that happy place many Airsofters know and some still dream about called snappy trigger! As for the 1200mAh I had other plans for it, and my good old Dytac M4 was its match. And what a match! If you look at the video, the Dytac was outputting some good 18 rounds per second with the Life 9.9v battery, and now with the 11.1v I get 24-25! It’s just amazing! And the gun is pretty much stock, I only added a Classic Army High Torque Motor to it! The gun is now devilish and I get and extra 200mAh when compared to the LiFe battery with the exact same size at only 1000mAh! So more juice to burn during the games, less chances to run out of it in the middle of a firefight! Also, when getting the trigger response and the huge ROF a Lipo gives you, you’ll be getting also something very important over your opponents: the edge and some fear of having to face a BB shower if they don’t call their hits. Believe me there can be no better deterrent to them not calling their hits than the end of a 25rps AEG pointing at them ready to hit them multiple times! Just priceless!

When it comes to most AEGs, the 1200 mAh is a must, provided you have a Lipo ready AEG and don’t mind servicing it more often than usual. The trigger response is brilliant, and the ROF is just exponentially increased. So much that it a smile forms on my face every time I pull that trigger. And I go to a happy place!

But if you’re running a DMR with a very powerful spring and a high torque motor, I would strongly suggest you get a bigger power pack, such as the Electro River 2600 mAh which provides power throughout the day and helps maintain a fast and snappy trigger response.
Either way, the Electro River Lipos available at Gunfire are a good choice since you’ll get good quality and affordable Lipos that don’t sacrifice on safety and have a great performance.