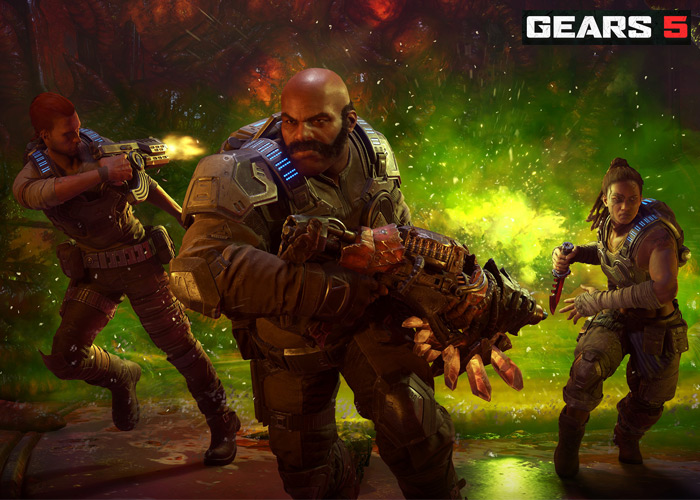 When I thought of Microsoft running out of ideas for the Gears of War ever since it released Gears of War 4 in 2016 after acquiring all rights to the game from Epic Games in 2015, it has removed the covering of what many say is the finest Gears game. The 5th in the series, “War” has been removed from the title and it is simply called “Gears 5” and developers The Coalition and Microsoft are about to unleash it next week to gaming fans eagerly awaiting for its release.

The Coalition are experimenting with the Open World for this game, whilst maintaining its gore and violence with the characters still carrying the chainsaw equipped rifles that every third-person shooter player is familiar with.

"Gears 5", is of course, a sequel "Gears of War 4" with a focus on the character Kait Diaz. This will be about her origins and also show a darker side of JD Fenix and the other "Gears" soldiers. There is a also utility drone called Jack, it can revive other characters as well as give Kait special abilities that can be collected during the course of the game. There are some new weapons introduced but overall the it has the same cover system and combat just like in the previous "Gears".

For new players there will be a Bootcamp to help them learn the ropes of the game so they’ll be ready when they start the campaign or any of the multiplayer modes. There is a three player coop that can be done online or split-screen and achieve ranks in Gears Tour of Duty.  For those curious what the game has to offer, here they are:

The world is crumbling. The Swarm has corrupted the Coalition’s robot army and is descending upon human cities. With danger closing in, Kait Diaz breaks away to uncover her connection to the enemy and discovers the true danger to Sera – herself.

Outrun the bomb, outsmart the Swarm, and escape the Hive! Escape is a new, aggressive, high-stakes co-op mode featuring a three-player suicide squad that must work together to take out enemy hives from within.

May the best team win! Rack up points and trade up for superior weapons in Arcade, a frenetic playlist built for jump-in, over-the-top fun. With ten other game types plus new and classic maps, Versus rewards every competitive style, from casual to pro.*

Can you and four friends endure waves of ever-stronger enemies and bosses? Survive using new hero abilities, building defenses, collecting power, leveling up your skills and working as a team.

Create custom Escape hive maps and experiences to share with and challenge your friends.

To be introduced to the game is “Operations” which will drop every three months and will come with new modes, maps, characters, features, customization items, and more.

Gears 5 is set to be released on the 10th of September 2019 and will be playable on Microsoft Windows and Xbox One.