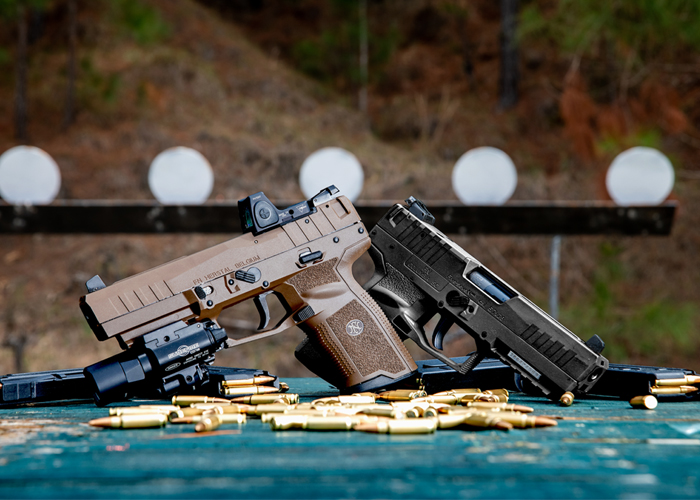 The first pistol that uses the 5.7x28 mm ammunition, the FN Five-seveN Pistol, finally gets an upgrade that it needs and be able to compete with new generation handguns. The Five-seveN MRD (or  Five-seveN MK3 MRD) is an optics ready that the FN USA announced yesterday, the 13th of June.

Available in Black and FDE, the Five-seveN MRD can be mounted with almost any mini red dot sight or for those who prefer the term, the micro sight. What’s even makes it an attractive and already very powerful pistol, is the ability to attach a suppressor using a threaded barrel accessory. 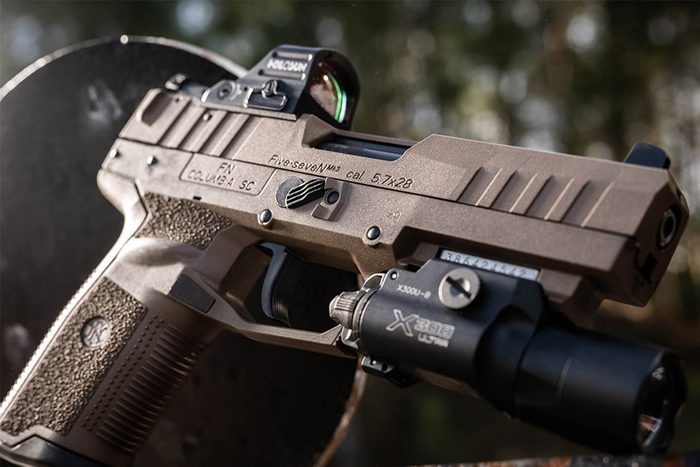 Over a year ago, the NATO has standardized FN’s 5.7x28mm Caliber, the round has opened opportunities for other manufacturers to use it for their PDW offerings. But for those who prefer FN Five-seveN and the new FN Five-seveN MRD, it is the perfect backup with the iconic and unique FN P90 PDWS and its airsoft version is very popular amongst players especially for CQB games. 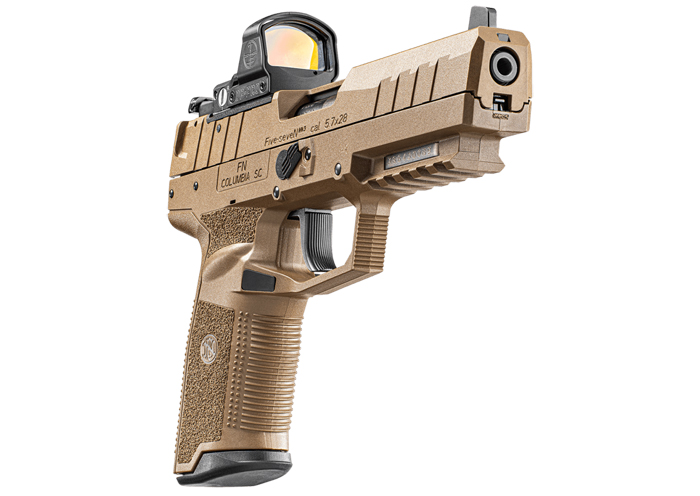 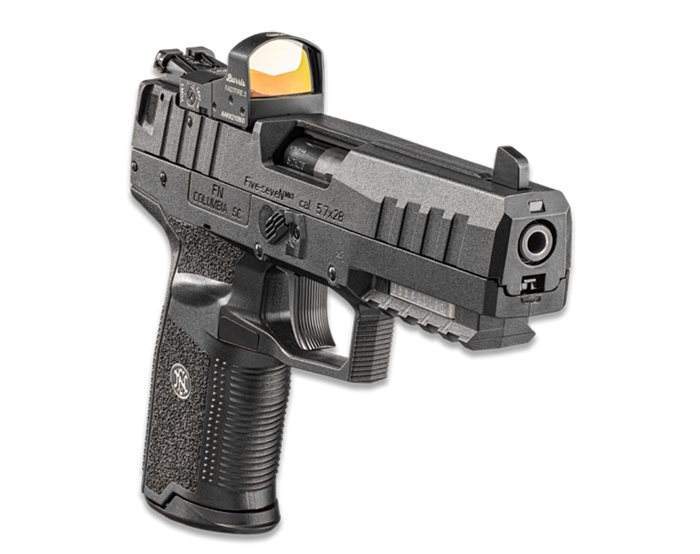 When purchased, the FN Five-seveN MRD comes with a two 20-round magazines, base plates to use with the various mini red dot sights and a zippered case.  We just hope the airsoft versions comes to the market soon as we like its handling, especially the Tokyo Marui and Marushin versions, with the latter sold by Cybergun overseas.

More details in the press release below:

“The FN Five-seveN pistol has been immensely popular since its introduction. Its original design capturing the performance of the FN-designed 5.7x28mm cartridge made it an instant success, and it’s positioned to do it yet again with the dramatic redesign of the FN Five-seveN MRD,” said Chris Cole, Vice President of Sales and Marketing for FN America, LLC. “With the addition of an integral optics mounting system on the slide, an already accurate pistol now redefines what handgun accuracy means. We’re truly excited to bring this new pistol to market with features our customers want in their favorite FN caliber.”

The FN Five-seveN MRD, like its predecessor, is a 5.7x28mm-chambered, delayed blowback-operated pistol. The internal, single-action-only hammer produces a clean and consistent trigger pull that breaks at approximately 6 pounds, with minimal take-up and a short reset. FN’s 4.8-inch cold hammer-forged barrel combined with the inherent benefits of the design and high velocity bottleneck cartridge produces a flat-shooting pistol with extremely low felt-recoil. Users can stay on target with accuracy and precision at extended ranges, unmatched by any other semi-auto handguns.

“When we embarked on this design update for the Five-seveN MRD, we focused on the core benefits our user base wants in a modern pistol,” said John Ryan, Director of Product Management for FN America, LLC. “The Five-seveN pistol was already extremely accurate and reliable, although there was untapped performance in the design and cartridge to bring forward. Milling the slide in the factory allows for immediate mounting of almost any MRD on the market, with improved ergonomics and controls, the Five-seveN MRD delivers more precision and versatility for the modern handgunner.”

Following FN’s optics-ready pistol tradition, the Five-seveN MRD’s optic mount consists of a series of plates that mate the optic to the slide. Just like FN’s 509 optics-ready pistols, users are able to mount a miniature red dot sight within minutes using the corresponding plates and screws provided with the pistol. The system is compatible with most common miniature red dot sights including the Leupold DeltaPoint Pro, Trijicon RMR, Vortex Optics, Burris FastFire series, Docter Optics and more. The three-dot photo luminescent sights glow in low light conditions, are adjustable for elevation and windage and co-witness with certain optics.

With newly enhanced slide serrations and extended cocking ridges at the rear of the slide, the Five-seveN MRD’s overall operability and user manipulations are vastly improved while the ergonomic changes to the frame’s backstrap allow for a more natural point of aim and better fit. A new stippled texturing on the grip frame along with more extensive front strap serrations improve grip consistency for complete control. The magazine release has also been enlarged and reshaped for intuitive control and rapid reloads. Carrying over from the original design are the 20-round standard magazine, safety selector located directly above the trigger, serrated trigger shoe and trigger guard.

The FN Five-seveN MRD is available in matte black or FN-signature flat dark earth (FDE) and ships in a zippered pistol case with two 20-round magazines and optics-mounting hardware required to mount an optic. 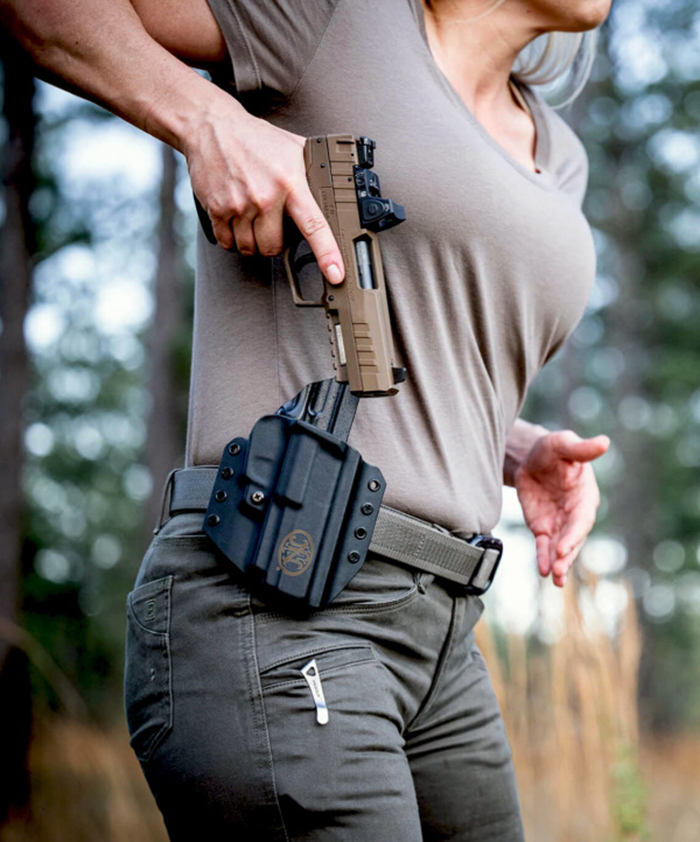