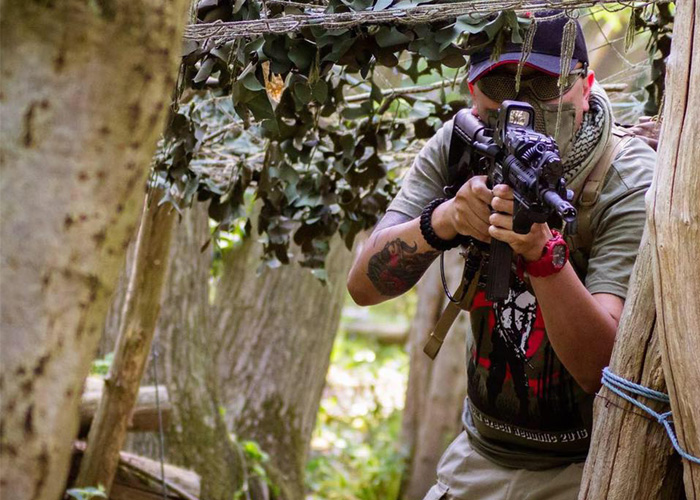 I finally had the chance to take the Tippmann M4 HPA Airsoft carbine to the test. In Part 2 of this review I will talk about the M4 and also the kit that I used.  There are a lot of advantages using the Tippmann M4. One advantage is that there are no electronics in this RIF so it can virtually be used in any weather condition. Also, as I have mentioned in Part 1, it is compatible with Marui-compatible AEG magazines so it has that versatility of using mid caps or high cap mags depending on the users or type of game play.

Setting up the Tippmann M4 is not at all difficult as I first thought of. It does need a bit of getting to use to the kit, how to put it together and also getting used to the air line.

The rig that Gordon of Battlezone Airsoft setup for my Tippmann with is a Proto 3000psi HPA bottle with a Tippmann micro-line remote with slide check. From the reviews that I have read, it was specified that the working pressure of the Tippmann M4 should be 3000psi. Some players, like Gordon, use a bigger bottle, the 4500psi bottle. I brought with me 2 48ci bottles. In normal conditions, a 48ci bottle should last you the whole day but since I was reviewing the rifle I thought of getting another bottle to be sure I had enough air for the day.

The Tippmann micro-line is a 42" paintball/airsoft air line that is 30% thinner than the standard remotes. You can use remotes made by other brands but it should be able to handle 3000psi. This particular remote has a slide check system which allows the user to disconnect the line from the rifle without depressurizing the system. The slide check system is a collar located at the rifle end of the line. The user simply slides the collar towards the rifle to turn the air and to slide it away from the rifle to turn the air off. You will hear a "hiss" of air when you slide to collar.

Having an air line attached to you RIF is something that I had to get used to. I placed my bottle on a hydration backpack and threaded the line through the hole where the water tube would go through. I needed to enlarge the hole a little bit to make the end of the airline go through. I spent a good amount of time trying the line in different angles and see what feels comfortable. Once I found the place I was happy with, I was ready to play. Gordon was kind enough to set the Tippman M4 for me, he assembled the HPA system, adjusted the ROF to around 15-17 rounds per second which felt very realistic. He also adjusted the FPS or muzzle velocity for me and was at around 340fps +/- at the time the marshals measured it which was around 10:00am with an outside temperature of below 20°C. So the only thing that I had to adjust was the hop-up. This was very easy as it only needs an allen key included in the rifle package to turn a screw located in the ejection port. Turn the screw clockwise to increase the hop and the opposite way to lessen the hop. Shooting this RIF is quite a fun thing to do. Unlike other HPA drop in engines the Tippmann M4, since it was developed purely as a gas powered RIF has a nice blowback which you can clearly notice on the video. Shooting it in full automatic mode makes you appreciate that blowback really well and the ROF that Gordon set this at gives it a very realistic feel. But the thing that I enjoyed more is shooting this in semi automatic. The trigger sets really quick and you don't get that lag feeling with an AEG. Basically this rifle will fire in semi auto as quick as your finger can pull that trigger.

There are a couple of players using the Tippmann M4 and both of them told me that they found that using heavier weight BBs work better. On the reviews that I have read, players are always talking about how bad the stock inner barrel is and that it needs to be upgraded as soon as possible but one player said he's using a stock inner barrel with .30gram BBs and he is pretty happy with them. With a muzzle velocity of 340fps on 0.20gram BBs, using 0.30gram BBs will drop the muzzle velocity to around 280fps +/- . For this review I stuck to 0.20gram BBs.

During test firing, distance archived is around 40metres once the hop-up was adjusted and on semi auto with BBs firing straight with every shot. Same accuracy was achieved on full auto 2-second burst fire. On firing with  longer bursts, the accuracy seem to suffer a bit as there were a couple of fliers.

In game use, the Tippmann started out really good. I was hitting targets form around 30-40 meters away. The trigger response was great especially on semi auto mode. The blowback is a great bonus and the sound the rifle makes is pretty impressive. The line becomes a bit irrelevant once I got playing and actually found most of the experience quite fun.

Halfway through the first game, I started hearing a hissing sound made by air leaking through the gap between the upper and lower receivers. You will actually hear this in the video and will see me try and remedy it by giving the rifle few slaps and by turning the slide check on and off. The gun was still firing but I was losing air quite bad. So off I went to look for Gordon who unfortunately was playing for the other team. Once I found him he straight away looked into it. He couldn't see any problem with the O-rings so with an aluminium coloured Allen screw he looked to the underside of the upper receiver and tightened the air inlet. This seemed to have sorted the problem which we think happened as a result of the gun’s first use and that the blowback must have shook some of the parts loose.

By this time it is was already around 1300 and the temperature is in the mid 20°C. When we re-chronoed the rifle, it was firing at 362fps! As I am reviewing the rifle, the marshals allowed me to carry on using it on DMR mode or single shots only. We chronoed it again after an hour and it seemed to have settled at 360fps. The marshals think that this is due to the temperature getting warmer as the day went on. This has made the marshals to rethink how they will need to deal with HPA users especially during hot days. After a quick adjust of the FPS back down to below 350fps the day went along very well apart from having to change air bottles as the other one ran out due to the airless problem that I had. Apart from the air leak problem that I suffered, my first time experience with the Tippman M4 HPA went well. The blowback and sound are a big bonus. Being able to use hi-cap and low-cap AEG magazines is a big selling point and gets rid of the need for proprietary gas magazines.

Here is my list of things I found worth mentioning: For my first use of the Tippmann M4, I can say that this RIF is great and has the potential to be an awesome airsoft weapon. It is not perfect and still has some minor problems that Tippmann needs to sort out. The good thing is I was told that Tippmann has a first class customer service and will send out replacement parts really quick.

I will try my best to do a part 3 review where I will try and address the issues that I have mentioned and will try and make some upgrades with parts that are now available.

I would like to again thank Gordon Bond of Battlezone Airsoft for assisting me during the review.