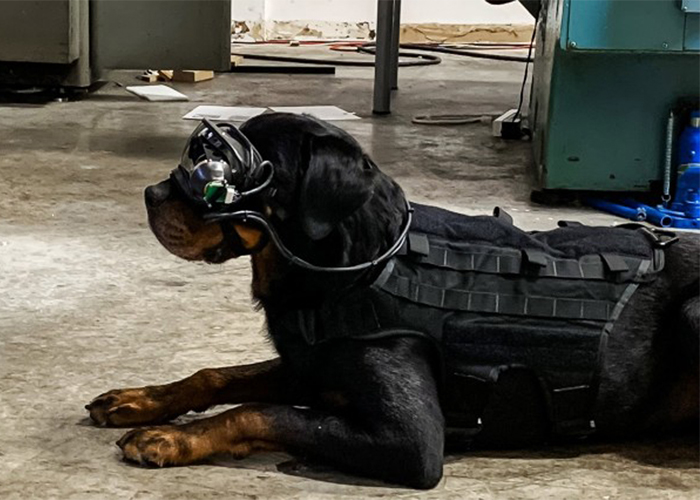 For airsofters who are  also canine lovers, buying those MOLLE-equipped harnesses so they can also have their dogs to be as tacticool as themselves, here is something that they wish they can also give their dogs. The U.S. military is working with a company to put Augment Reality (AR) goggles on military working dogs which is more for the protection of their handlers rather than the canines themselves.

The foremost purpose of the AR goggles is for the handler to command the dog from a distance, especially when the dog is sent to scout ahead and sniff out explosives given that the dog’s nose is still superior to man-made sensors. Even in rescue situations the dog can go through spaces that are too tight or too dangerous for the handler.

In an article at the Army.mil website, the canine AR goggles project is being developed by Command Sight Inc. and is funded by the Small Business Innovation Research program and managed by the Army Research Office (ARO), an element of the U.S. Army Combat Capabilities Development Command’s Army Research Laboratory.

Command Sight Inc. was founded in 2017 by Dr. A.J. Pepper for the purpose of developing technologies to bridge animal and human communication. The company developed the prototype goggles for the dogs based on conversations with former and current military working dog handlers. The goggles are made to fit each dog and with cameras installed on the goggles, the handler sees what the dog sees.

“Augmented reality works differently for dogs than for humans,” said Dr. Stephen Lee, an ARO senior scientist. “AR will be used to provide dogs with commands and cues; it’s not for the dog to interact with it like a human does. This new technology offers us a critical tool to better communicate with military working dogs.”

At present, the handlers communicate with the dogs by hand signals or laser pointers, which still require the handler to be near the dog, and in the case of the laser light, can also be a safety issue. Voice commands via radio was also looked into but can lead to confusion for the dog. Visual cues through the AR goggles look to be the better option. 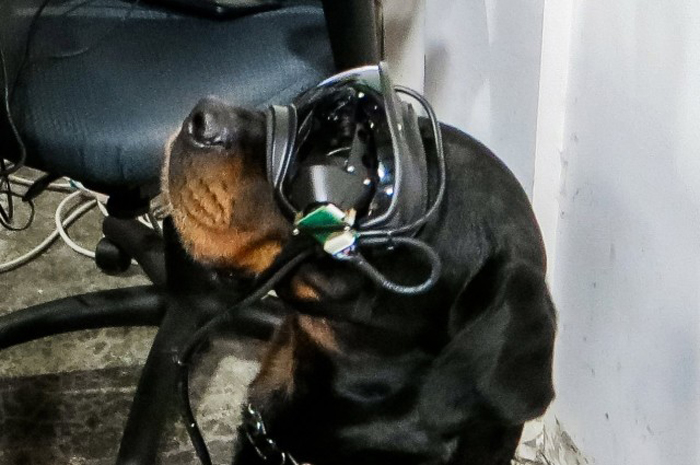 The goggles used for the AR project are already being used by the canines for eye protection during operations and made by Rex Specs, famous for making goggles for dogs.

“Even without the augmented reality, this technology provides one of the best camera systems for military working dogs,” Lee said. “Now, cameras are generally placed on a dog’s back, but by putting the camera in the goggles, the handler can see exactly what the dogs sees and it eliminates the bounce that comes from placing the camera on the dog’s back.”

For now the prototype is wired and the dog on the leash to test out the initial tech being developed for the project. Later on, a wireless version will be developed for even more challenges for the technology.

“We are still in the beginning research stages of applying this technology to dogs, but the results from our initial research are extremely promising,” Peper said. “Much of the research to date has been conducted with my rottweiler, Mater. His ability to generalize from other training to working through the AR goggles has been incredible. We still have a way to go from a basic science and development perspective before it will be ready for the wear and tear our military dogs will place on the units.”

Also, the Department of Defense Rapid Reaction Technology Office will be funding the next phase of development and has allowed Command Sight to work with the Navy Special Forces to build prototypes that will be tested on their military working dogs. Each of the dogs received a 3D scan to get dimensional data to understand where to place optics and electrical components, specific to each dog.

There was no revealed timeline when the AR goggles are projected to be used by the dogs.

All photos from the U.S. Army.