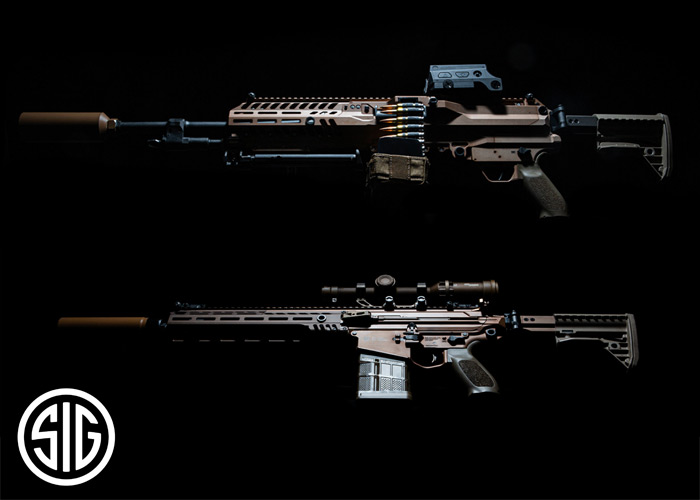 We continue with our reporting with the New Generation Squad Weapons (NGSW) Program as the U.S. Army has whittled down the number of contenders to three. This program is something that is closely watched as it will be determine the future weapons of the U.S. Army as it seeks to replace the M16/M14 service rifles and the M249 SAW with new ones that will be using the 6.80mm rather than the 5.56mm ammo.

As reported yesterday, one of the remaining three is SIG Sauer, which is seen to be a heavy favorite given that not so recently, it has one the Modular Handgun System of the U.S. Army, with its P320 designated as the M17 and M18 service pistol that are now being adapted by the remaining branches of the U.S. military.

The first two competitors of SIG Sauer, AAI Corporation Textron Systems and General Dynamics-OTS Inc., have submitted entries that proposed ammo that come with weigh reducing features. Textron has its  Cased-Telescoped (CT) Weapons & Ammunition while General Dynamics propose a Polymer case for the 6.8mm ammo. As for SIG Sauer, the company is proposing a hybrid brass and steel case for ammo, and looks much closer to the traditional way ammo is encased. All companies are proposing for both the NGSW-R (Rifle) and the NGSW-AR (Squad Automatic Weapon).

So what do you think? Will the SIG Sauer NGSW-R and NGSW-AR prototypes something that will meet the requirements of the U.S. Army?  Not much detail is mentioned here apart from 6.8mm ammo. We’ll have to content ourselves with the external details as shown in the images revealed by the company. Both prototypes feature the M-Lok Rail System, can accommodate suppressors, telescopic stock, and fully ambidextrous operations. 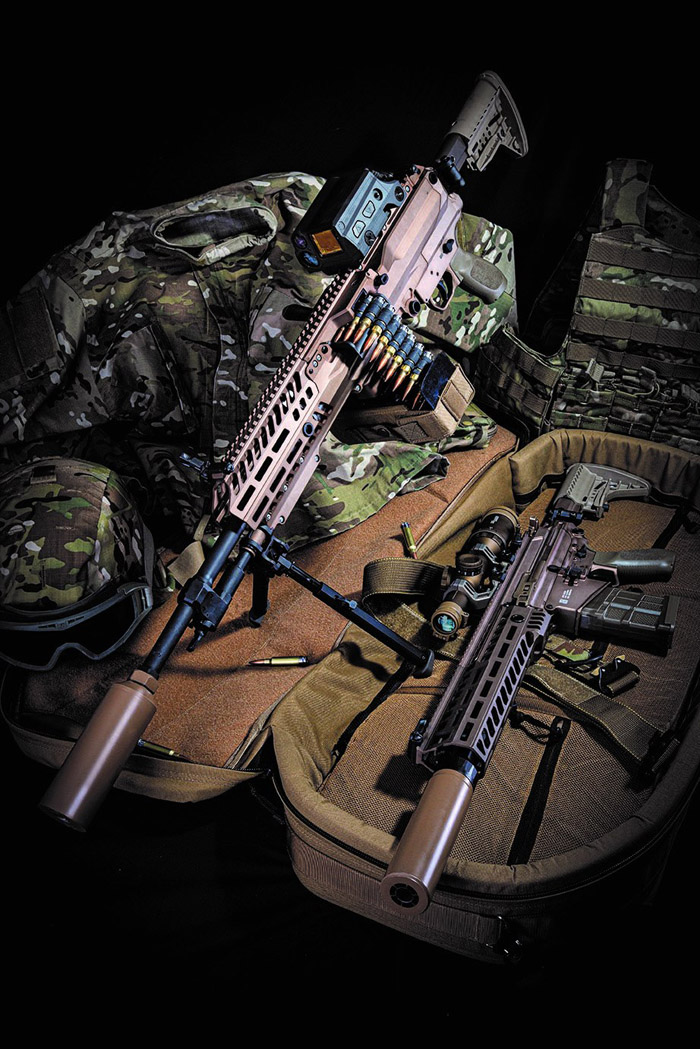 More on these prototypes as per press release from SIG Sauer:

NEWINGTON, N.H., (September 3, 2019) – SIG SAUER, Inc. is proud to announce the official award of a contract by the U.S. Army in the down-select process for the Next Generation Squad Weapons (NGSW). The award encompasses the complete SIG SAUER system consisting of 6.8mm hybrid ammunition, a lightweight machine gun, rifle, and included suppressors. SIG SAUER will provide single-source manufacturing for ammunition, weapons, and suppressors allowing for less risk and increased capability for the U.S. Army.

“The U.S. Army is leading the world in the first significant upgrade to small arms in decades to meet the growing demands of soldiers on the battlefield. We are honored to have been selected for the Next Generation Squad Weapons program bringing increased lethality to the warfighter over the legacy weapons,” began Ron Cohen, President & CEO, SIG SAUER, Inc. “At the core of our submission is our newly developed, high-pressure, 6.8mm hybrid ammunition that is utilized in both weapons, and is a significant leap forward in ammunition innovation, design, and manufacturing.”

The SIG SAUER 6.8mm hybrid ammunition is designed for increased penetration at greater distances. Cohen continued, “using patent-pending technology the SIG SAUER Ammunition division has engineered a completely new cartridge resulting in a more compact round, with increased velocity and accuracy, while delivering a substantial reduction in the weight of the ammunition.”

The primary objectives set forth by the U.S. Army for the NGSW-AR was a weapon with the firepower and range of a machine gun, coupled with the precision and ergonomics of a rifle. The SIG SAUER NGSW-AR submission is an ultra-light, medium caliber machine gun with AR ergonomics, and chambered in 6.8mm hybrid ammunition. Features include quick detach magazines, side opening feed tray, increased available 1913 rail space for night vision and enablers, folding buttstock, and suppressor.

“The U.S. Army challenged the industry to bring forward significant improvements to the legacy weapons. The SIG SAUER NGSW-AR is lighter in weight, with dramatically less recoil than that currently in service, while our carbine for the NGSW-Rifle submission is built on the foundation of SIG SAUER weapons in service with the premier fighting forces across the globe. Both weapons are designed with features that will increase the capabilities of the soldier,” commented Cohen. “The final component of the SIG SAUER Next-Generation Weapons System is our suppressor, which through exhaustively researched design enhancements, reduces harmful backflow and signature.”

“SIG SAUER has designed the most comprehensive solution to meet the requirements of the Next Generation Squad Weapons to enhance mission effectiveness. We are looking forward to partnering with the U.S. Army throughout this process and ensuring our soldiers are equipped for the demands of the modern battlefield,” concluded Cohen.