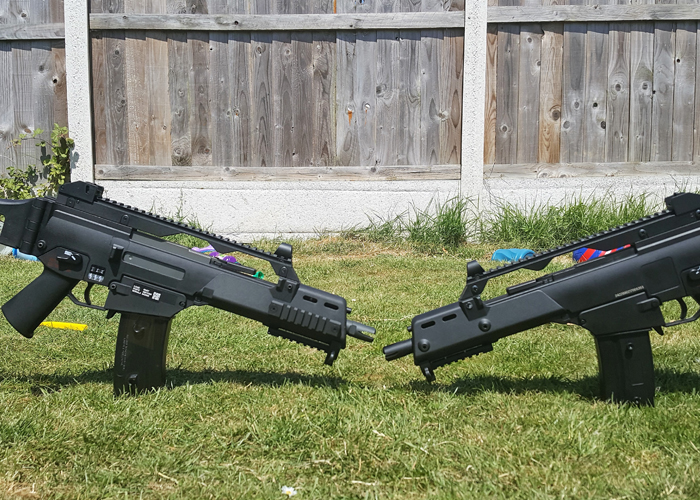 In this review in which we compared two guns of the same variant made by two different companies we will focus mainly on the aesthetics.  Jing Gong is a company that make low to mid range guns at low prices. Specna Arms follow this same trait but with differences to Jing Gong.

Both guns are constructed from polymer with the exception of the barrels, the inner barrels, the handguard rails, the rear sights, the triggers, the flash hiders, and the folding stock mounts which are made of alloy. The construction of both guns is very sturdy and they weigh almost the same with the Jing Gong weighing in at 2.67 kg and the Specna Arms just a tad heavier at 2.78kg. 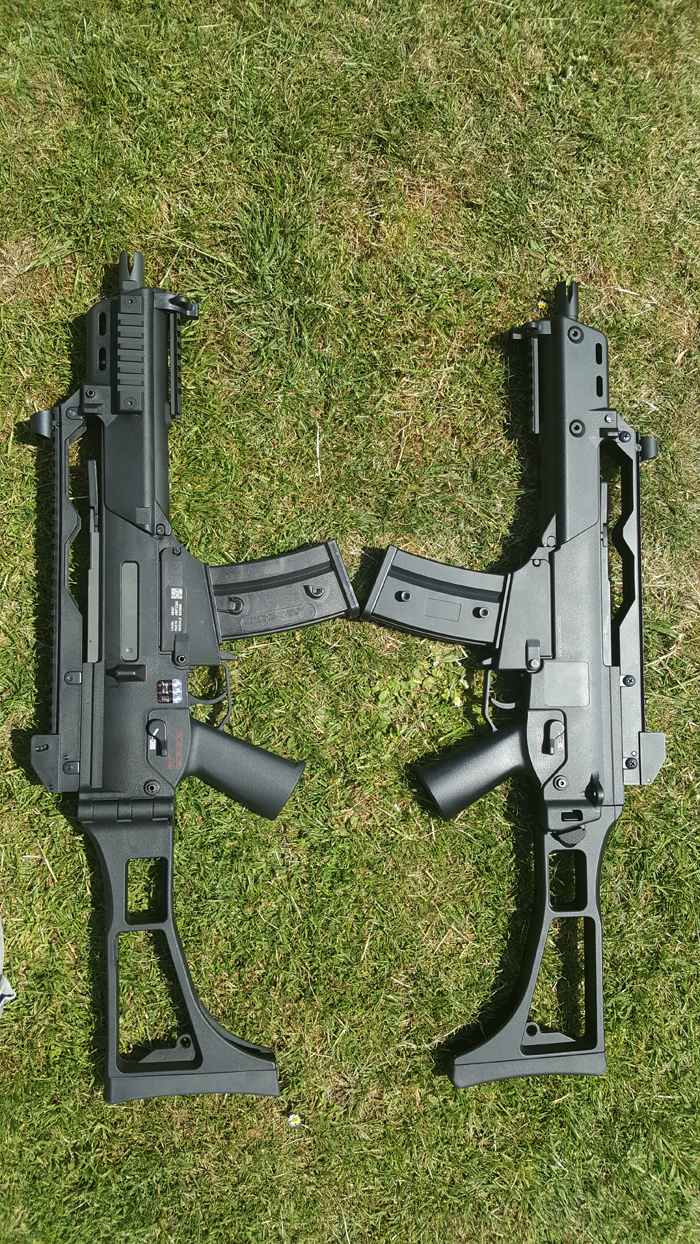 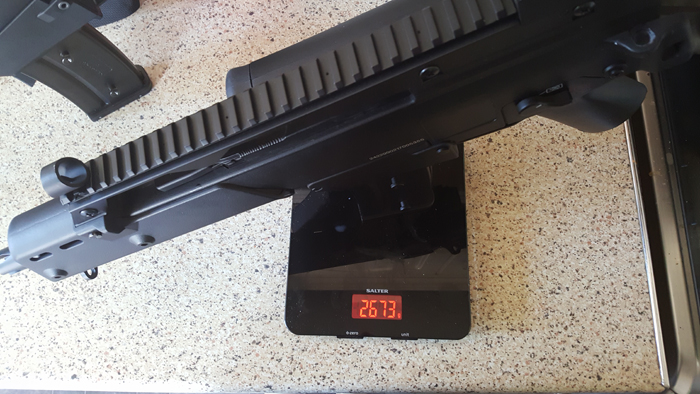 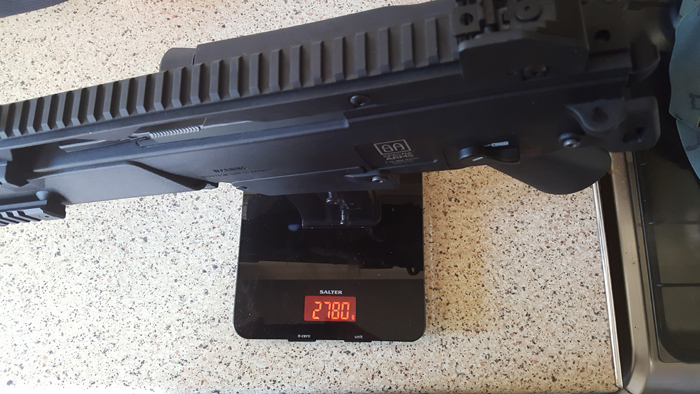 The polymer used in the Jing Gong looks cheaper with its plastic sheen whereas the Specna Arms offering has a wonderful dull finish which looks closer to the real steel G36. The mould seams that run the length of both guns are acceptable on the Jing Gong’s iteration of the G36 but are rough in some places. On the Specna Arms variant, the mould lines are almost seamless. They are very smooth with only minor blemishes. 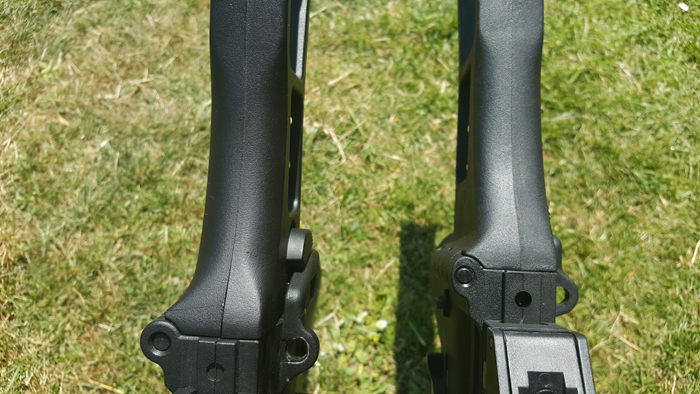 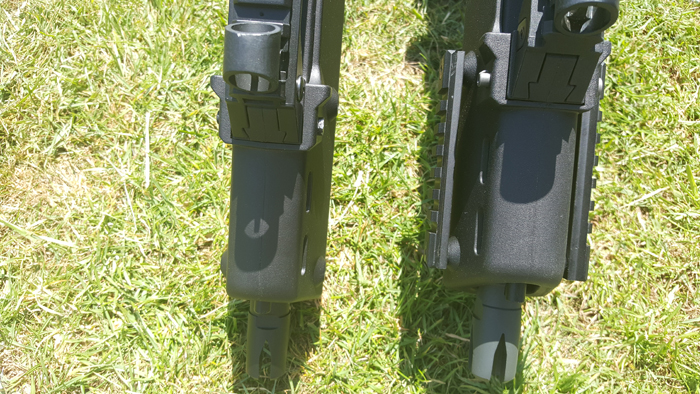 The stocks on both guns are foldable and feel strong with no give when extended. However, the Specna Arms stock feels more refined in shape, and the buttpad on the stock has a lot more give in it making it more comfortable when pulled up to the shoulder for firing.

Folding the stock on the Specna Arms G36 exposes a port for changing the spring in the gun. This makes it very easy to change the spring for boost or reduction of FPS depending on rules of sites or simply the player’s preference. According to Gunfire’s description of the gun this only takes 45 seconds. The Jing Gong G36 AEG does not feature this. 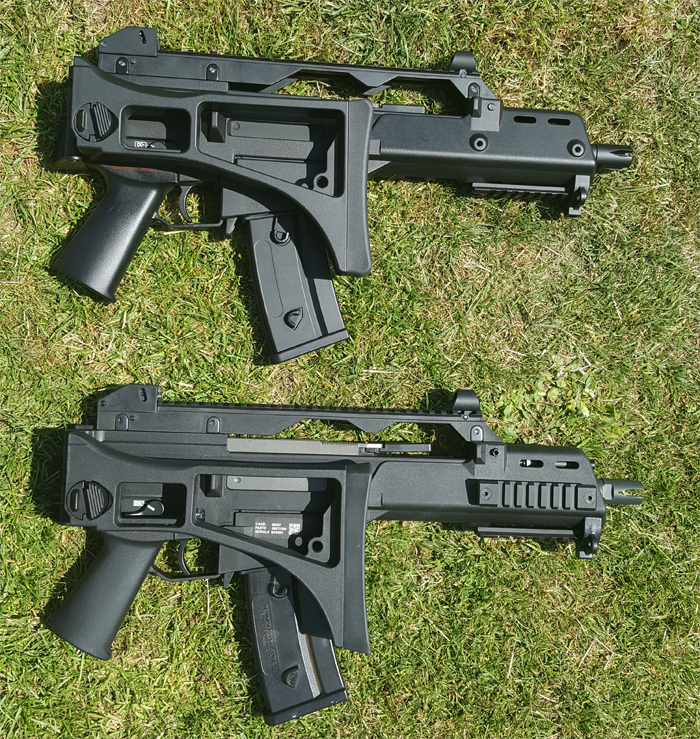 Both guns feature ambidextrous fire selection controls with the positioning on the Jing Gong g36 further forward making fire selection a bit clumsy. The Specna Arms version has the selector perfectly positioned for optimal usage. The markings to show “safe”, “semi” and “full auto” are slightly better printed on the Jing Gong as I found them to be a bit blurry and dull on the Specna Arms gun. The triggers on both guns have a trigger pull that is not too long nor too short. The mag wells are again both well constructed and when the magazine is slotted into the guns it does not wobble. 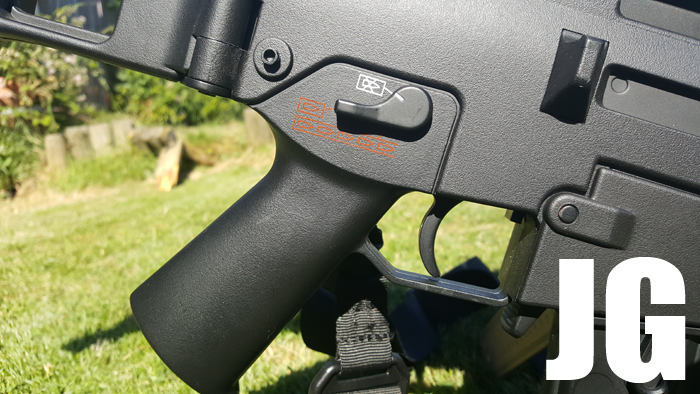 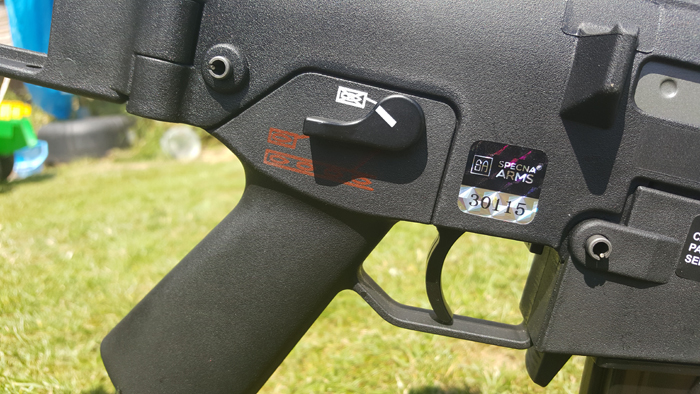 The magazines themselves are both very similar with the main difference of the Jing Gong being a 470 round high-capacity AEG magazine whilst the Specna Arms magazine is a 350-rounder. 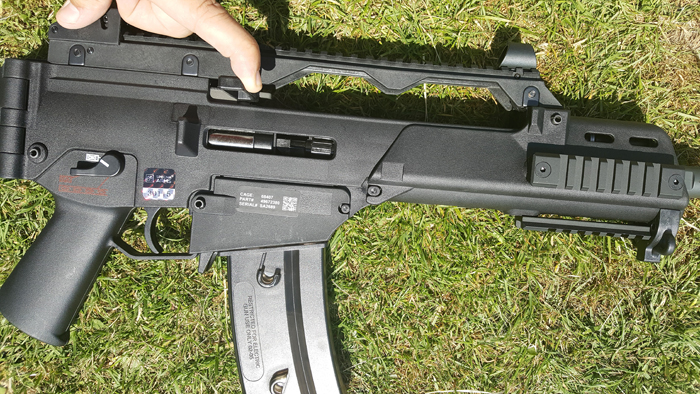 The Specna Arms G36 features an electric blow back system. Every time you pull the trigger in semi or in full auto the bolt and charging handle cycle back like just like the real world G36 giving the gun a great realistic feel. The Jing Gong does not feature this.

The Jing Gong hand guard features a rail running underneath it with positions either side of the hand guard for additional rails. The Specna Arms variant has this pre-installed giving it far more real estate than its rival. 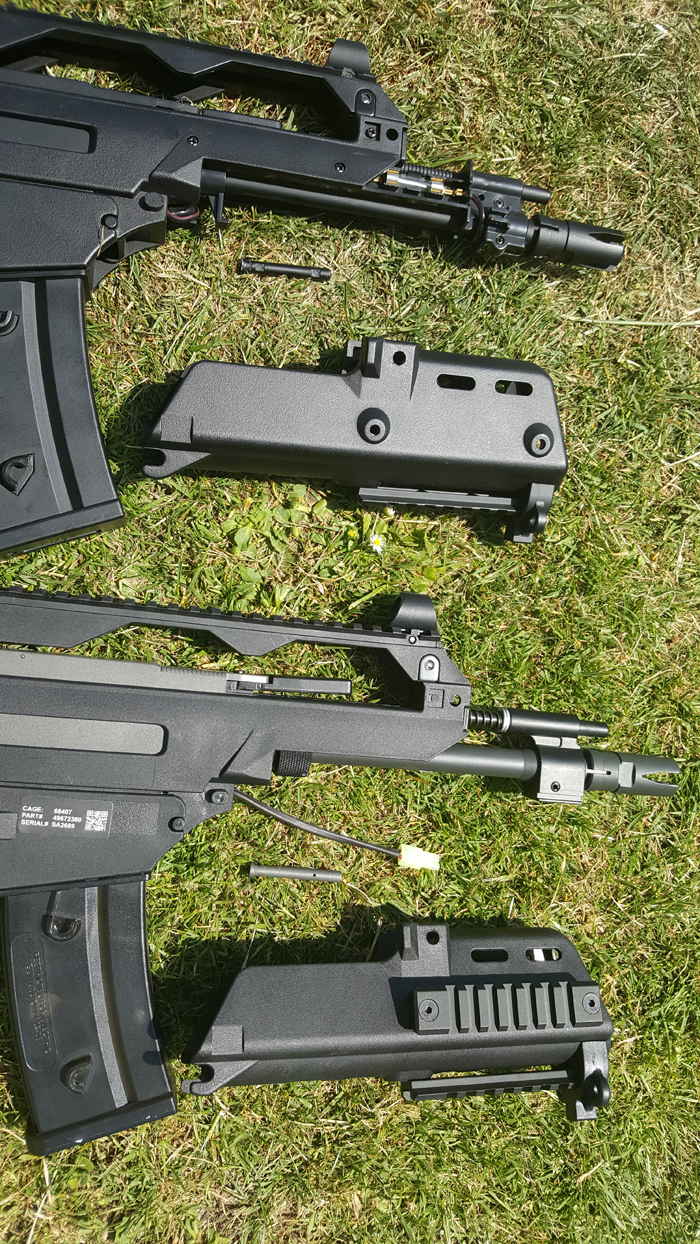 The carry handle/top rail on both guns is made of polymer both feature fixed front and rear sights with the latter on made of alloy. The rear sights on both guns have flip sights for different range. However, on the Specna Arms gun this is better executed having both a notch sight and a peep hole sight depending on your preference, whereas the Jing Gong only features two peep hole sights of two different sizes. The rails themselves are the same length and offer enough room on both guns for a variety of different optics. 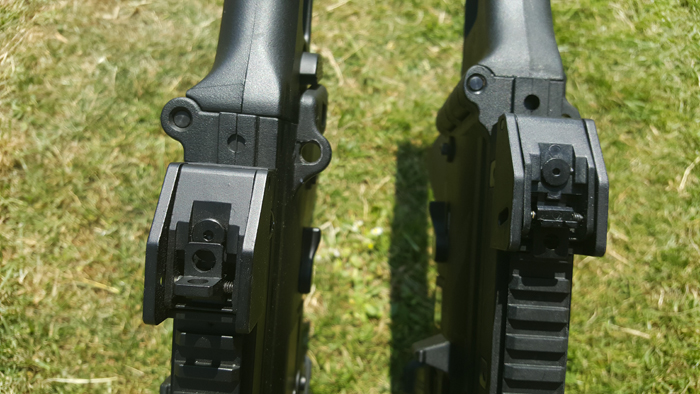 During firing tests both guns fired well with no jams or miss feeds. The cyclic rate on both guns was very similar and both felt snappy and sharp. The Specna Arms out-performed the Jing Gong in realism due to the EBB system.

Overall both guns are very similar but the difference, though small,  is what defines them. The Jing Gong is well constructed gun for beginners, but the Specna Arms G36 goes to extra lengths in detail. With the pre-installed side rails and EBB system it out performs in look and feel. With its quick spring change system it out performs in function. At €134.00 , it is more expensive but the differences more than make up for it.

Both guns are worthy of recognition for entry to mid range guns. Depending on your preference and your wallet both guns will perform well.