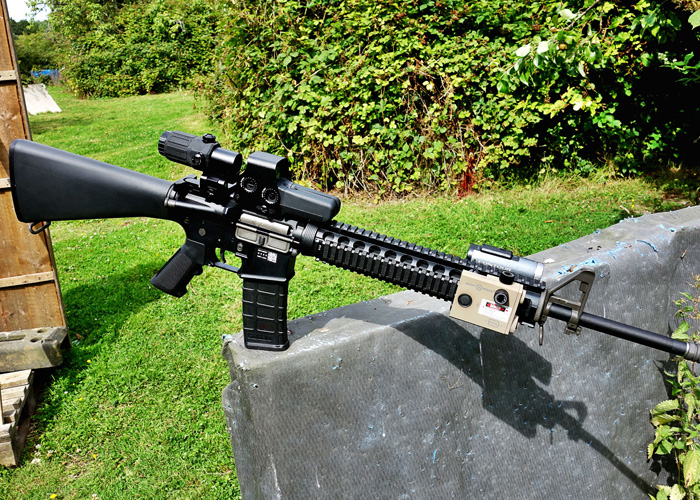 Lasers in Airsoft are always seen as non-essential and sometimes people fear them. If well-used, and used in the right circumstances and the right laser, it can even be very helpful for your gameplay. Usually most commercial grade lasers are allowed on Airsoft sites with the exception of blue lasers which usually have a far more powerful output.

In case you’re wondering what are considered “safe” lasers, most lasers with 5nW of power or under are safe. Of course the more under the 5nW you go the weaker the light will be and the harder it will be to see in a well-lit environment, including dimly lit environments.

Most Airsoft lasers you see lying around on eBay are way under 5nW, which makes them quite safe. However, most are rendered almost useless for Airsoft since the laser beam is so underpowered that in most medium to well-lit situations you’ll have a hard time seeing the laser, and sometimes even at close range!

So you want to go all the way to that limit and still maintain the level of safety where your opponents don’t need to wear laser safety glasses!

According to the FDA, with a 5nW laser, the reflexive blink of the eye will be enough to prevent any serious damage from these lasers. This usually causes temporary flash or blindness, but can injure the eye if you stare without blinking.

So if used correctly you can have fun with lasers in airsoft. I mainly like to use them in CQB where the pace of the game is so fast that aiming down my sight or looking through any red dot is often lost time that you need to react in a fraction of a second. A laser helps me to engage the target without actually shouldering my weapon system, making me slightly faster than if I were to look through my sight/ red dot.

Also, certain occasions you might want to mark you targets to a teammate that isn’t close to you, without making any sound. A laser can easily be pointed at the location you want to show to your teammates, but it can also give you away.

For me, CQB is really the place to use a laser, if you have any other ways and scenarios that you find yourself using a laser do share suing my twitter account @op7airsoft.

The Sightmark Lopro Green Laser Designator falls under the safe to use category of lasers with 5nW of power which is great for Airsoft since most sites won’t have any problem of you using it. When it comes to the Sightmark Lopro Green Laser Designator, I really think this a laser done the right way, not only because of the power of the laser, but also because of its packaging:

The Thermoplast casing almost fooled me into believing this PEQ like green laser case was made out of metal. The case is hard, solid to the touch, structurally very sturdy, and with a nice rubbery finish that is slightly cold to touch. Hence my mistake.

The rubber coating is also very nice and quite resistant to scratches, but not really immune. After a few airsoft games, I started seeing the first chips off the paint. However, it is nothing too serious taking in account the poor treatment it has been subjected to.

Its compact size combined with the thermoplast build makes it a very lightweight laser, weighing only 6.2oz, or around 175 grams, this makes it perfect to attach to any weapons system since it won’t give much additional load. Another thing that makes it perfect is its low profile, hence the Lopro designation: with only 38mm in height, the Sightmark Laser Designator provides enough clearance for most sights --- from scopes, to red dots to reflex sights. When looking through them you won’t even notice the laser is there thanks to how low it sits. Using the laser couldn’t be any simpler. All you have to do is pop in the included CR123A battery into the casing by unscrewing the battery cap. Then all you have to do is use the black button on the top to turn it on or off. The button is rubber and the battery compartment is very well isolated with rubber o-ring which makes this laser quite resistant to the elements which is of essence on any Airsoft product. On the left side and at the top of the case there are two dials that allow you to adjust the windage and elevation of the laser. This is very easy to use and you don’t need any tool whatsoever since one small turn/click moves the laser 1 MOA. So you can easily adjust the laser even when you’re in the middle of a game, which is great since in airsoft we often adjust the hop-up, which in turn makes me well-orientated to adjust the laser. Attaching the laser to any Picatinny rail system couldn’t be easier thanks to the built-in mount which can be easily fixed just using my fingers and turning the huge screw that helps it remain securely in place. In the box there is also a pressure pad which can be connected to the port on the back of the laser. This will allow you to activate the laser when pressure is made on the pad. The pad has several contact points making it easy to use. However, the way to attach the pad is rather feeble since its done by the included two adhesive Velcros. The issue is firstly, it is not a very secure way to mount this since it can be pulled/ripped easily; and secondly, since the adhesive loses its glue/stickiness and then after a while it doesn’t work at all especially when you want to interchange the laser between guns. Here is where I honestly think that Sightmark should’ve upped their game since this is such a premium laser with an uncommon construction quality. The way you attach the pressure pad is sort of a let-down.

As for the laser itself is a very bright and crisp. Very well defined, and the beam can be seen very well especially at night and in low lit areas. The laser can be seen up to 600 yards, using a scope of course. But at close/medium range and especially during broad day light, which is where I mostly use it, it’s quite strong and very visible.

At night when it really gets cool as you can see the whole beam, which is really cool. The dot is very crisp and defined which attests for the quality of the laser that Sightmark have used. Overall this is very well-built and well-designed laser that has loads of potential for CQB games. But most of all it will last you and you can run it without adding much weight to your AEG,  and giving it a lot of style.

The only shortcoming is the way you attach the pressure pad which could have been a bit better since this is a premium accessory.

But all in all, if you don’t want a cheap looking laser with no range at all, then you should look into the Sightmark Lopro Green Laser, which is available at Airsoft Megastore for $99.97.

I would like to thank Ross from Airsoft Megastore for the opportunity to let me review this great laser.