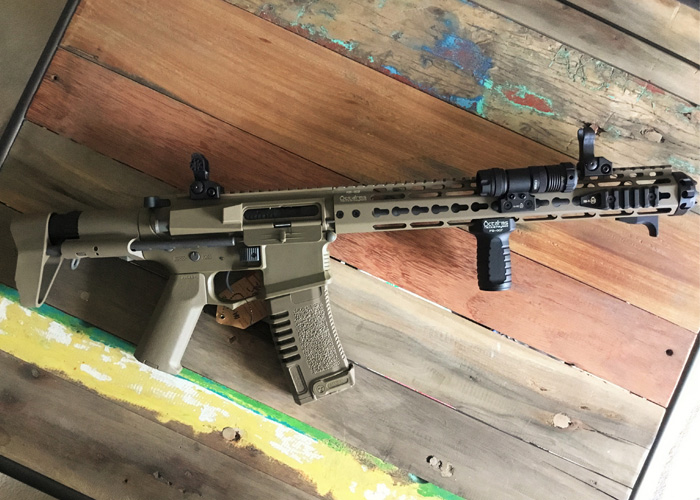 The latest addition to the Amoeba Family by Ares Airsoft is the AM-016. This is the long version of this AEG variant from Ares with its 13.5" keymod Octarms handguard. When I was told that our friends from Ares Airsoft were sending me another Amoeba AEG, the first thing that I said was I hope it can take a bigger battery. This was because the first Amoeba AEG that I came across with was the AM-013 "Honey Badger" variant and the battery compartment of that is not even small, it's tiny. The AM-016 has a very different feel from the first one that I reviewed. The receiver and internals are still the same but the extendable stock feels more robust than the AM-103. What is new with the AM-016 is that features the Octarms Keymod Handguard System. Here is the run down of the features of the AM-016 AEG: Internally, it features the ARES original EFCS or the Electronic Firing Control System Gearbox which can be configured with the EFCS Programmer box that you will need to buy separately. Also, it has what ARES calls the RVTS or the Rapid Velocity Tuning System or in simple terms, a Quick Spring Change feature.

ARES has kindly sent some Keymod accessories with the AM-016. This is comprised of the the KM-ACC-007 or the laser pointer with mount; the FG-007 foregrip; a handstop set; an offset rail mount; a pair of 6" rails; and a pair of 3" rails. This is my first on hand encounter with the Keymod system and I find it rather interesting. Unlike a RIS or RAS system where you have rails on all four sides of the handguard, the Keymod system is more of an adaptive system wherein the user can customise the handguard to whatever is best suited for him/her. Also, with the use of other Keymod accessories there is no need to use rails to mount them. This not only makes the handguard appear tidy, but it also makes it light without the unnecessary rails. Basically, if you do not need the rail, do not attach it. The Keymod system is also Ares Airsoft’s own Octarms Keymod system though VLTOR Weapons Systems designed the KeyMod as an open source project, allowing anyone to use it for their own purposes and contribute to its improvement. The finish of the Keymod is vey good and the accessories have a very good high quality feel on them. The accessories attach very well on the Keymods holes but they are not quick detach which I thought the Keymod system would be. You would still need an Allen key to tighten the screws.

The rifle itself has its own good bits and bad bits. Good bits are that it is light; the Octarms Keymod System and the accessories are of good quality; and it comes with a high capacity magazine, the flip-up front and rear sights are a bonus, and it has a good rate of fire. The hop-up system is a dial type system so adjustments are easy to do. The "Crush Shield" flash hider is nice to look at, and making the AEG look distinct in the airsoft field.

For the bad bits, there are quite a few. The plastic used is not the most impressive material that I have seen and to be honest, I expected a lot better from Ares Airsoft. The top and bottom receivers are plastic. Yes, they are lightweight but the quality of the finish is not that good, the seam where the two halves meet is not neatly finished. The plastic used for the top receiver is thin enough that it flexes when you press into it. It even sounds hollow when you knock on it. The plastic dust cover bends easily and wobbles around to its points of attachments. The front and rear flip up sights are made of thin bendy plastic. The extendable stock is a bit better than the first one I reviewed as the adjustment rods do not go into the battery compartment but it is near impossible to extend it one- handed. The butt stock is small and does not feel comfortable when shouldered. The EFCS or internal MOSFET to make it simple to configure the AEG is a bit useless if you do not have the EFCS programmer box which you need to buy separately and could cost you around £40 on eBay. I placed the AM-016 through the chrono and it measured at a surprisingly low 285 fps. I will re-chrono this again when I get to my local site, Airsoft Plantation. So my first impression with the Amoeba AM-016 is it does not make quite a good initial impression. But of course I need to dig deeper since it does not necessarily mean it is a bad performer.

Standby for part 2 as I will make an in game review which I hope the AM-016 will redeem itself. Watch the quick unboxing video that I made showing the packaging and other bits and bobs that Ares Airsoft sent with it.

Read Part 2 of the Review here.