One Grunt's Opinion: Airsoft, Not Just A Kid's Game 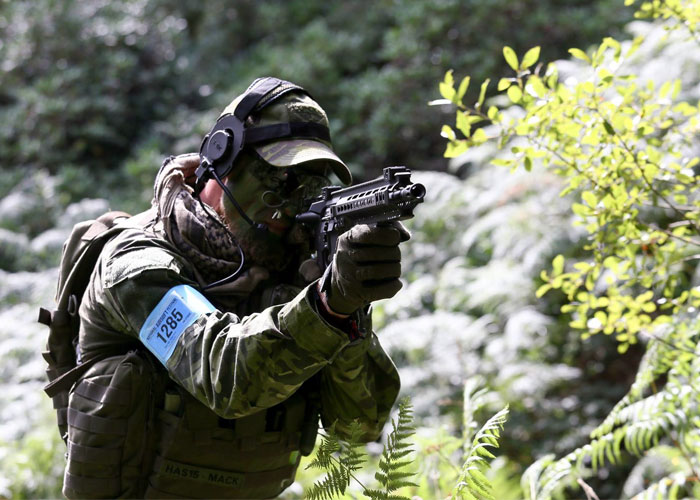 What’s the biggest headache these days across the entire shooting community?

Answer: Where are we going to get ammo and will we have to give up a first born to afford it?

Without a doubt ammo is at an all time short supply and probably all time high in price. This is putting a lot of stress on shooters who are having to cut back on training because of this ammo crisis. Unless you are sitting on a massive hold that you are probably now selling at an outrageous profit you are probably like others, hunting for illusive ammo supplies. When you do find it in supply it is so expensive that you have to buy less and cut your training short.

What is the modern shooting enthusiast to do in this situation?

Switch over to wood working? Well no, wood has become extremely expensive also.

So where does a shooting enthusiast turn in order to keep with the hobby they like and continue to grow their abilities?

Today’s shooting enthusiast should really be playing airsoft. Yep, you heard that correctly. Instead of worrying about finding enough ammo to train you should be searching for your first airsoft gun. Instead of buying overpriced ammo at the local range you should be buying BBs from the local airsoft field.

Instead of a shortened session of paper target shooting, you should be trying out the two way range that is an airsoft game. No longer just a kid’s game played with a Daisy rifle or Walmart BB gun. Airsoft has evolved from the backyard play to large scale military style war game simulation events, with the average player in their mid-30s.

Not only could you be saving money and keeping up training but you could also be adding a new incredibly dynamic element to your training. The two way range is often the final test of your skills and capabilities, but unless your training with simunitions that test will come in a life or death situation. Because as the name states bullets are going to be coming back your way. For all the hours you will be putting in on paper targets, that paper target will never shoot back at you. So you’ll never know until it’s life or death how you would react.

This begs the question, are you really prepared?

Travis Haley of Haley Strategic talks about cross training with airsoft and live fire that can maximize time and money investment in weapons manipulation practice.

Soldiers in the infantry drill daily, go to the range and practice maneuvers in live fire exercises. Yet many will tell you of moments of pause when that first shot comes back their way. Then training kicks in and muscle memory takes over, leading to the instinctive reaction to return fire maneuvering to eliminate their target. Now how ready can an avid shooter say they really are for a life of death scenario if they are now having to cut back training and never engaged a target shooting back? Airsoft and more specifically milsim is the element you’ve been missing in your life.

But BBs don’t fly as far as bullets and airsoft guns are just cheap toys. Yes, BBs don’t travel as far but your average hand gun engagement occurring at a distance of 7 yards or less. Yes, there are plenty of cheaply made airsoft guns but once you look beyond Walmart and seek out the airsoft specialty stores there are endless possibilities. You’ll discover that the one for one scale and quality are much better than you would imagine. The usefulness of airsoft to train and the potential to help grow future gun enthusiasts has not gone unnoticed by the gun industry. You can see this in the fact that major brands like Glock, H&K, Smith & Wesson, KRISS and many more have authorized the creation of licensed airsoft versions of many of their models.

The gun manufacturers are seeing the potential, why aren’t you?

If this isn’t already news to you, here’s something that might be. Your average airsofter, in particular your milsim player, probably knows more about weapons manipulation, small unit tactics and close range engagement tactics than your average avid range shooter. Many of these folks are playing or practicing 2-4 times a month and probably know how to set up their combat gear better than you for a force on force engagement. This is a wealth of knowledge and experience you can never gain at a range shooting at a paper target. Even at your more dynamic steel target ranges, where you can get more freedom and can really work on your mechanics you are limited. You can’t fire at a moving armed target that is actively shooting back or safely practice the tactics of a fire team.

Now I’m throwing a lot of praise on airsoft and to be honest, just like any other hobby it has its clowns and people that will make you shake your head. There’s no getting away from these people in life. You’ve seen plenty of people at the range that should just sell their gun and go home because they were going to hurt themselves before any bad guy. But you have to look beyond all that in airsoft to get to the good pay duty. You could tomorrow afford BB ammo, an airsoft gun and face the ultimate training scenario at a milsim event. You will be going up against a kid that’s probably younger, faster and better skilled in short range engagements than you are. Don’t let this training avenue pass you by.

Airsoft is the hobby you should be involved in as an avid shooter. They complete each other, closing the circle of training you want in order to be the most prepared for the day in which it will mean your life or death. The gun industry has taken notice, the NRA should wake up to it and you could use it now that ammo is so expensive or hard to find. It’s not just a kid’s game. It’s the training opportunity you’ve always wanted.

Javier "Darkhorse" Franco, formerly from This Week In Airsoft, runs his own Airsoft Blog at Facebook called "One Grunt's Opinion." He shares this blog entry for posting on Popular Airsoft.