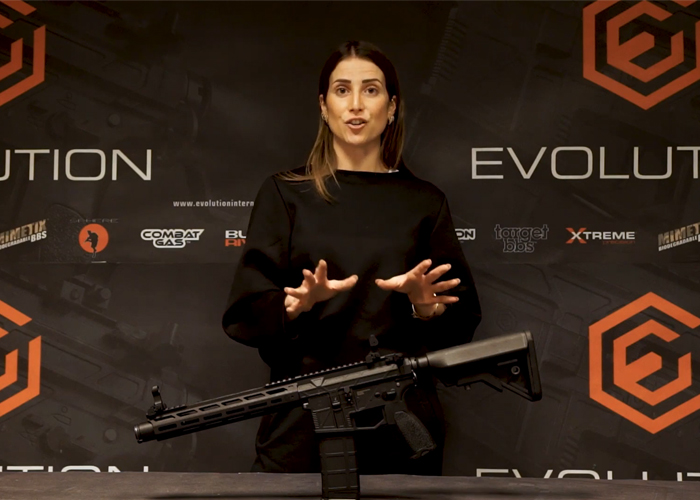 Evolution Airsoft put out this video tutorial on how to program their E.T.S. II... "Evolution International is a very dynamic company with Strong Research and Development. It was the first Airsoft manufacturer to release an Airsoft Gun with electronic functions fully programmable via trigger, and the first manufacturer to launch on the market a Smart Airsoft Gun with tens of advanced functions readily available out of the box.

Evolution International is the only Airsoft manufacturer who designs and manufactures in-house their own electronic trigger units and assembles guns in Italy.

At Evolution the key-word is “simple and easy”. This is the secret behind the worldwide success of the Smart Airsoft Guns that use the E.T.S.III™ as electronic engine.

We told you that we were ready to break the mold again. We already did it in the past to revolutionize the Air Soft World, and finally today we can reveal you what our engineers have been working on for more than a year.

As you well know, a few months ago we started talking about the Smart Airsoft Gun concept. The technology behind the Evolution’s Airsoft Guns reached a so high level of complexity and sophistication, that we cannot anymore talk about Electric Airsoft Guns. We should call them Electronic Airsoft Guns but that would be reductive as the amount of technology, design and development process is more similar to the one of a Mobile Phone than the one of an Airsoft product. So we now refer to this new guns category as Smart Airsoft Guns.

And today what we present to you is just part of this.

Today we present you the GHOST 2 Smart Airsoft Gun powered by the powerful E.T.S. II™, a brand new electronic unit designed and manufactured in Italy, with advanced programming functions never seen before in a polymeric Airsoft Gun.

The GHOST 2 Smart Airsoft Gun is the first polymeric Airsoft Replica to be equipped with such a powerful electronic unit that sets the new benchmark for the market in this category.
The iconic design of the Ghost incorporates the essence and spirit of the Evolution brand which set a new trend in the Airsoft Guns Industry. It is already of public domain that the iconic shape of the Ghost’s body has been copied by another brand to closely resemble the Evolution’s Ghost and probably other copies will follow. This is a demonstration of how good, original and recognizable the Ghost’s design is.

For those who don’t already know it, the Ghost body and the EMR Evolution Modular Rail hand-guard have been designed in Italy in Gardone Valtrompia by a real gun engineer that team-worked with Evolution International’s designer.

Ultralite Body is made of CarbontechTM a space-age impact- resistant engineering polymer.
Combining the Ghost design features with the powerful E.T.S. II™, the result is a unique product that will revolutionize the world of Airsoft Gameplay also for those players that prefer the lightness and versatility of polymeric replicas.

In fact, one of the main innovations of the new E.T.S. II™ is that it is extremely easy and natural to use.

After a few minutes of use the user will no longer need to look at the programming instructions as everything is super-simplified and user friendly, like a smart-phone, after all the Ghost 2 is a Smart Airsoft Gun.

Changing functions and programming mode with the Ghost 2 is a breeze, it is done in seconds, without the need of an instruction manual, a programming card, external units or a Bluetooth device, or a PC. We designed this gun for war-game players and war-game players do not carry so many things with them during games.

The Ghost 2 is for real war-gamers: it is programmed via trigger, using just the finger.
Furthermore to program the E.T.S. II™ it’s not necessary removing the battery so you can change your settings and adapt your gun to your fighting conditions even during game, or when you are under fire if it is necessary.

This is what you were waiting for, this is the Ghost 2, this is Evolution."