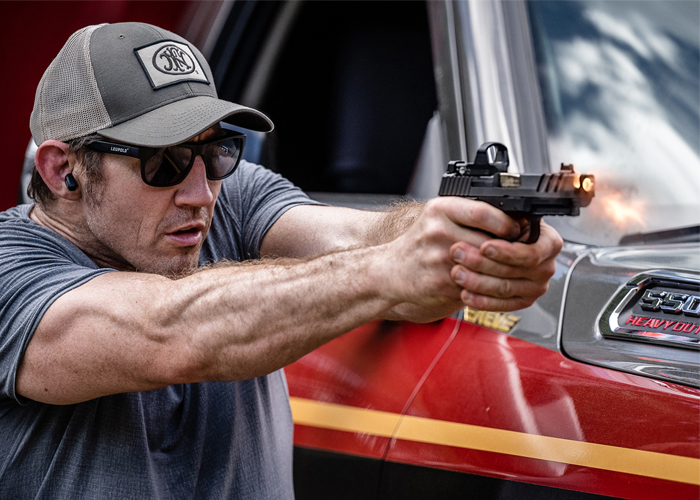 The Edge Series of FN Herstal got a new member and we like what we see, the FN 509 CC Edge 9mm is compact and is has a user-friendly compensator. For pistol shooters, having a compensator helps in control and accuracy by redirecting muzzle flash. The FN 509 CC Edge’s design also makes a convenient weapon to carry around.

Since the compensator is a selling point then let’s point out that is barrel-mounted threaded compensator that requires no tools for removal, and even requires no timing shims for reinstalling. The benefit of this compensator is that it reduces muzzle flip by 25% thereby allowing for faster and accurate follow up shots. The 9mm round goes through a longer wearing and durable gold-color Titanium Nitride PVD barrel coating. 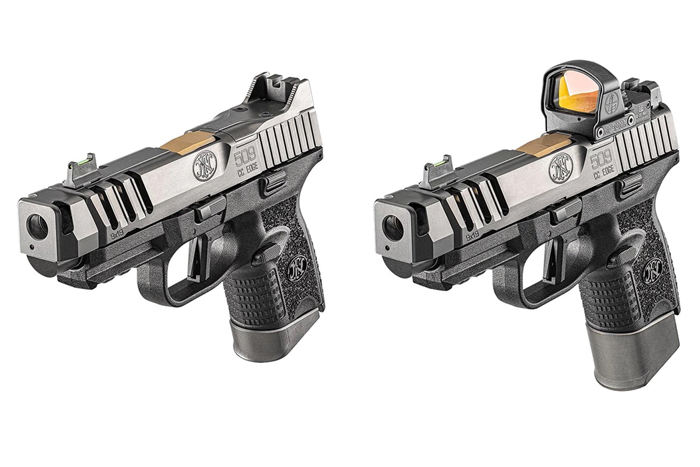 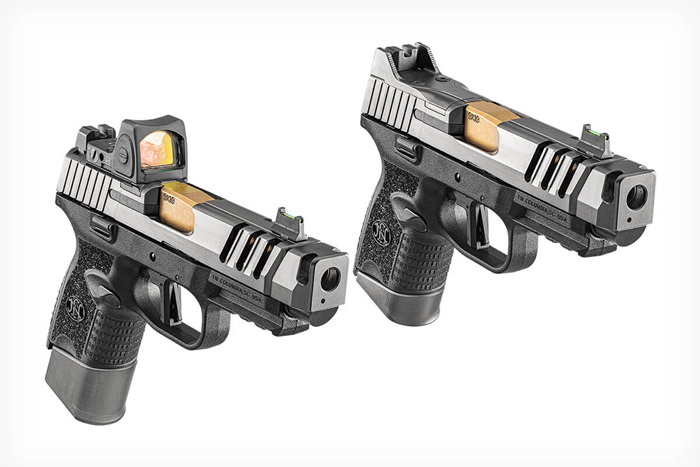 Not to worry about mounting optics as the FN 509 CC Edge is optics ready and can be co-witnessed with the green fiber-optic front sight and low glare blacked out rear sights. Over 10 micro red dot sights (MRDs) are compatible with the pistol.

The low profile mag release is reversible and the slide release is on both sides of the frame making it friendly to lefty shooters. The slide has lightning cuts and the pistol grip has interchangeable backstraps so the shooter can find a comfortable grip. When purchased, the FN 509 CC Edge comes with a 12-round and two 15-round magazines that come equipped with machined aluminum base pads. A 10+1  magazine is also available. 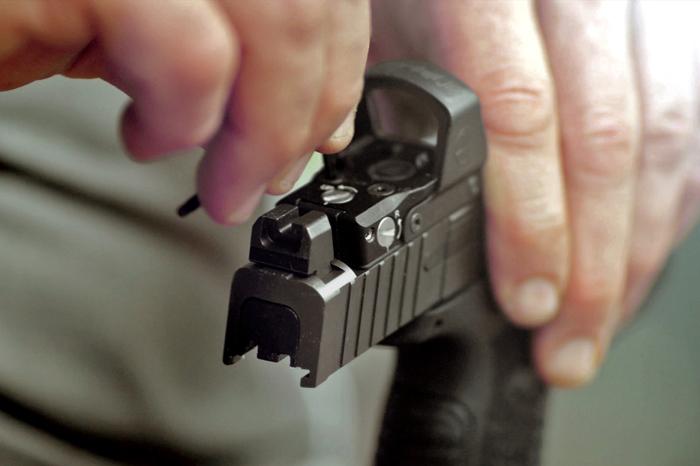 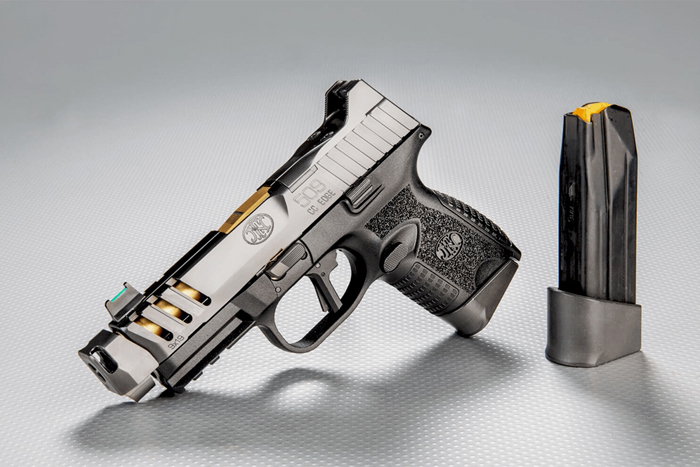 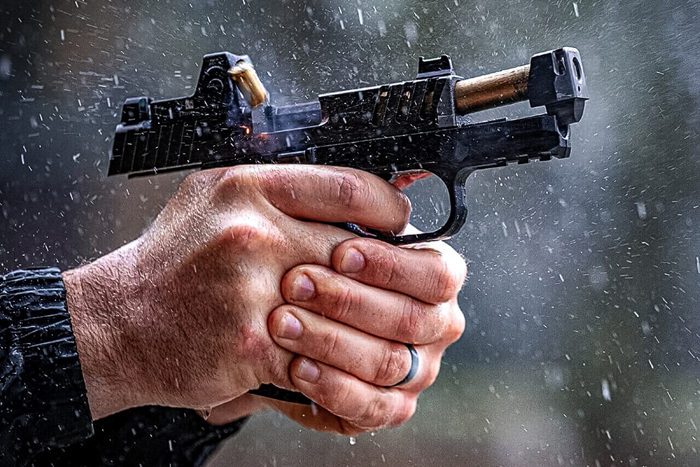 THE MODERN ERA OF COMPENSATED CARRY IS HERE

“With the FN Edge Series of products, our team of engineers addresses the challenges facing today’s gun enthusiasts in a unique and no-holds-barred way. It’s a combination of aesthetics and performance that have been fine-tuned to perfection directly from the factory and delivered against the promise of FN innovation,” said Mark Cherpes, President and CEO for FN America, LLC. “The FN 509 CC Edge is a high-performance, premium 9mm carry gun that offers improved sight recovery, shootability and more, all without sacrificing on overall size for concealed carry.”

Key to the FN 509 CC Edge’s performance is the FN compensator. Designed to reduce muzzle rise by roughly 25 percent, the compensator significantly decreases felt recoil while preserving the ability to carry concealed. The compensator features v-style ports on either side that vector gases and flash out of the user’s field of view. The result is a shooting experience that is flatter and more controlled, allowing you to maintain a consistent sight picture from shot to shot. Machined from stainless steel and coated with a graphite colored PVD finish, the compensator is extremely durable and is designed to withstand hard use across standard and self-defense loads for the widest degree of compatibility, while still utilizing the factory FN 509® recoil spring.

“The addition of a compensator to a concealed carry pistol is a delicate balance – too small and your compensator can be ineffective. Too big and you aren’t able to conceal as easily along with other possible issues,” noted John Ryan, Director of Commercial Product Management for FN America, LLC, when discussing FN’s methodology in developing this compensator. “Our engineering team took a whole system approach to the design, knowing that this pistol was intended to be a CCW option, and had to perform with as little recoil as possible, but still needed to fit within the styling of the FN Edge Series. The sleek design of the FN compensator compliments the aesthetics of the Edge Series perfectly while meeting performance requirements.”

Unlike most other threaded compensators on the market that require tools to remove and timing shims to align the compensator to the slide, the FN compensator’s quick-detach design allows for easy disassembly for cleaning and maintenance. To field strip, remove the slide, push in on the front of the compensator and rotate 90 degrees to release it from the barrel’s locking lugs. To resecure the compensator, the novel and quick operation is simply reversed. No timing or adjustment is required before use and due to the self-locking lugs machined into the barrel, the compensator won’t loosen over time.
“Even if you have the best comp in the world that results in virtually zero felt recoil, it’s still a simple fact that most compensated guns are difficult to disassemble for routine maintenance.

This was top of mind for us as we developed the FN compensator,” said Chris Johnson, Senior Product Manager, Pistols, for FN America, LLC. “Our team evaluated the more traditional attachment methods but opted to explore something new so that customers who purchased a CC Edge pistol would be able to disassemble both the pistol and compensator quickly for easy maintenance. Ultimately, we settled on this quick detach design that uses a compressed spring and lock ring within the compensator that mates to locking lugs cut into the barrel. It’s a future-forward idea and we’re excited about the potential impacts this has for our industry for other barrel attachments.”

In addition to the compensator, the FN 509 CC Edge includes a 12-round and two 15-round magazines with machined aluminum base pads; the extra weight of the base pads ensures an empty magazine drops free of the grip frame for a lightning-fast reload. The 4.2-inch cold hammer-forged barrel with recessed target crown and a new gold-color Titanium Nitride PVD barrel coating provide increased lubricity, hardness and long-wearing performance.

The micro-red-dot-ready pistol includes FN’s patented Low-Profile Optics-Mounting System™, allowing users to mount more than 10 different MRDs, without the need for a gunsmith. A green fiber optic front sight and low glare blacked out rear sights co-witness with the most popular optics.

The pistol’s slide lightening cuts and in-mold stippled frame texture, first introduced on the FN 509 LS Edge, allow for superior grip and control for fast and accurate follow up shots. Its low-profile magazine release is reversible for lefthanded users, with a slide release fixed on both sides of the frame. Rounding out the advanced ergonomics package, the interchangeable backstraps further customize fit in hand.

The Edge of Performance

The FN Edge Series™ is a collection of advanced firearms with chosen performance benefits fueled by collaboration with tier one operators intimately familiar with being in harm’s way.​ They are not “smithed” or custom one-offs. ​

FN Edge Series firearms stand on a bedrock of unmatched quality standards and exhaustive testing demanded by global militaries and law enforcement where uniform performance is table stakes and only the best examples make the final cut.​