Excerpts from Out of the Sandbox

Editor's Note: While most of us is content on just “dressing the part” of a private military contractor (or simply, contractor), Popular Airsoft Magazine is lucky to have been given a chance to sit down and chat with a REAL PMC. Mike, United States Army (retired), is now 53 years old. This feature story contains excerpts from a lengthy interview made by Dom, one of the new Popular Airsoft operators from Hungary. The full story will be revealed in the April 2008 issue of the Popular Airsoft Magazine.

During his military career, Mike was assigned to the 101st Airborne Division, 18th Airborne Corp. based in Fort Campbell, USA. Upon his retirement in 1995, he went to work for a private military company (PMC), and was assigned in the Balkans in Europe for seven years—providing logistic support to various military operations, including Implementation Force (IFOR), Stabilisation Force (SFOR) and Kosovo Force (KFOR). When things normalized there, Mike was given a short stint in the Ukraine and Russia with a company involved in the implementation of the “START Treaty” --- a bilateral arms reduction agreement between the US and the then USSR. 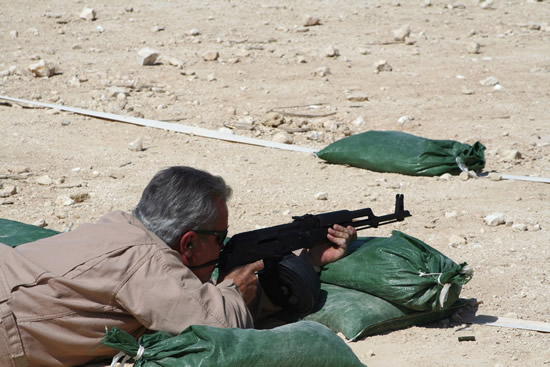 In the fall of 2003, as he was heading for the US to attend a university program in Occupational Health and Safety, he stumbled upon an Internet ad that simply said: “ex-military medics needed, must be weapons qualified and ready to deploy to Iraq”. Being a licensed nurse, a certified offshore and dive medic, and a remote area EMT, the ad caught his attention and sent his resume. Within minutes, after emailing my resume, a reply came which was just as simple as the first, “are you weapons qualified, prepared to deploy next Wednesday and can you be in Hereford, UK next Monday”? And that’s how his tour in Iraq started.

Here are excerpts of our interview with Mike:

What special training was needed in order to get the job? Was your background sufficient?

At the time, my background was sufficient to enter into this field, but you have to consider that I had 22 and half years of soldiering and eight years of working with civilian companies that were supporting active units in the field. As for getting into this field of work, it’s fairly simple to become an expert in a certain field while doing a tour in one of the armed services. PMCs are made up mostly of ex-professional soldiers. They just plainly don’t take kindly to new guys coming off the streets. They don’t have the time to train you or watch after you. 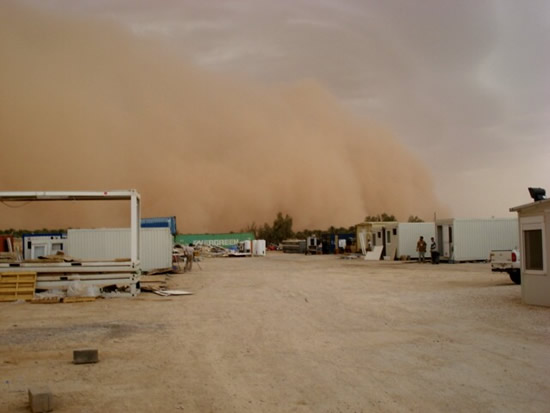 What was the most important thing during your training?

Trigger control and target identification were the two most serious issues. We were defensive and not offensive, so, you couldn’t just go around shooting up everybody that came your way. There were lots of civilians along the routes and one thing you most certainly didn’t want to do is get a reputation for being a “Cowboy”. Some of the units there did and what happens when you get that kind of reputation is people come after you.

How much time did your team spent on training and briefings?

His role and life within the unit…

What was your job/role within the unit?

All operators have security responsibilities first and foremost.  Secondly, we all had team responsibilities assigned to us—as drivers, gunners, leaders or medics. I was a medic but often found myself gunning, driving or as the vehicle commander.  The last year I was mostly commanding rear security or lead element.

Mostly we rested, but of course, there were the standard things that had to be done. Weapons must remain clean; ammo sorted, cleaned and organized; vehicles maintained; missions planned and briefed; training and the normal activities of daily living, like, washing, eating, watching movies and exercising, etc. It was generally boring but you found ways of keeping yourself entertained. 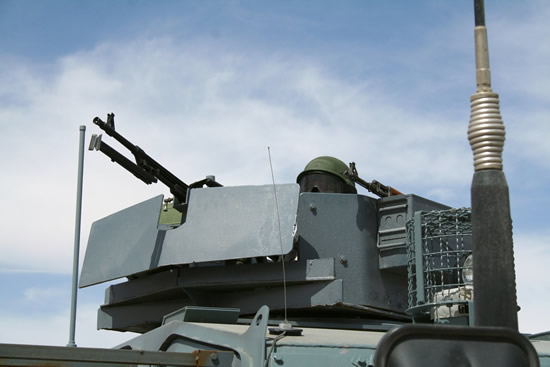 Guns, gears and other equipment…

Tell us something about your gear—plates, chest rig, weapons, etc.

Most companies provide you with some sort of gear and some even requires you to wear it. But, the two companies I worked for allowed us to choose our own as long as it fit into the insurance companies requirements. Most everyone used Blackhawk gears because it’s among the best made and readily available. It’s durable and lasts a long time. I don’t think I had a single thing from Blackhawk that failed me. Level 4 (or better) lightweight plates were the type of body armor I chose because it stopped the bullets and fragments. I learned this from experience. 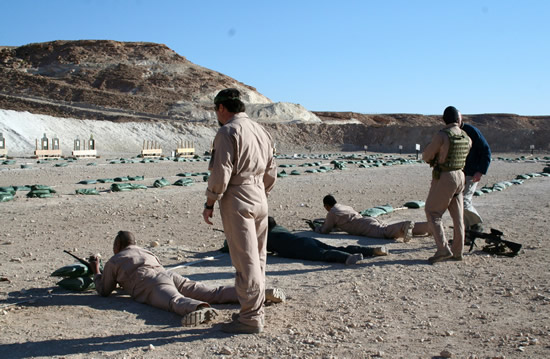 When first arriving here, you see people wearing long sleeves and the characteristic head coverings of the desert people. You shrug it off and wonder why someone would be so stupid.  People are seen lying under trucks, beside walls, anywhere there is shade you will see the congregations. It gives the appearance of laziness and a sloth like society.

Water becomes a focus in your life. Drink, drink, drink, you tell yourself, it becomes as necessary as breathing. You feel it the minute your body sweats out the water. You become sluggish and irritable and if not careful dizzy and weak. Wonder goes through your mind when you don’t need to relieve yourself or when you do it’s orange, dark, scant and the sudden reality of the necessity of drinking hits you.

How much maintenance does your weapon need? Was there a problematic brand in that environment?

Dust, dust, and more dust, it gets into everything and is a constant nuisance.  Weapons need constant attention so that’s why I chose the AK 47. It’s a great weapon for overcoming environmental problems. I use to think that the M16/M4s would be a weapon that I would never use because of it’s previous sensitivity to environmental problems. But with today’s modifications, they seem to be doing better and I had to rethink and possibly use one of these for a variety of different reasons.

Mostly because of there is just so many things available and so many resources to purchase things from. Another thing is, armors are available and trained to repair them and again the parts are there. If you pick an uncommon weapon then you are going to have trouble with everything associated with it. So, chose something plain and simple.

If you could buy whatever you want—blade, protective eyewear, vest, sidearm, primary weapon, etc.—what would your favorite load out for urban warfare be?

For general overall work in the field today I recommend the A4 with a heavy barrel and the .45 ACP as a general side arm. But, mission also plays an important role and where you are makes a difference. If you can’t get ammo then what do you have, “an empty weapon”.

Buy the best it may be expensive but who cares if it saves your life it’s priceless.

Most of our missions were now being done at night since there was less traffic and of course this particular Iraqi Police Station was right in the middle of the busiest area of downtown. At the time there was no traffic moving after ten in the evening because of a countrywide curfew.

It was one of those missions where they say the place is bad. One way in and one way out, I’ve always hated to hear that and knew immediately we would have to be alert and ready that night. Tarmyiah is a small town not 20kms from Taji, a US airbase just north of Baghdad. We were tasked to take a convoy of sand trucks into an Iraqi Police Station construction site. 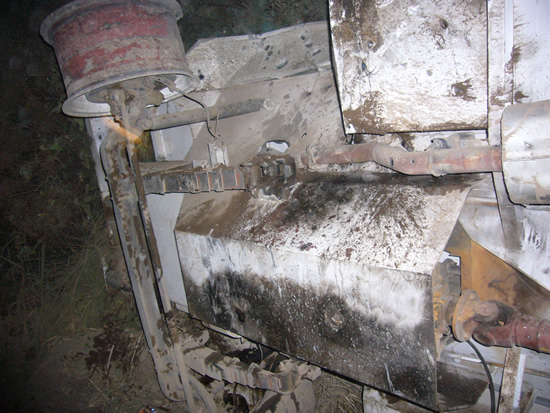 How hard is it to get back to normal life after so many years in a hostile environment?

I slept for a month. Seemed that was the only thing I wanted to do. Most people say they just don’t have enough and with the adrenaline rush you are always on it’s a truly a withdrawal as the song from John Denver goes “The readjustment blues are coming over me”. 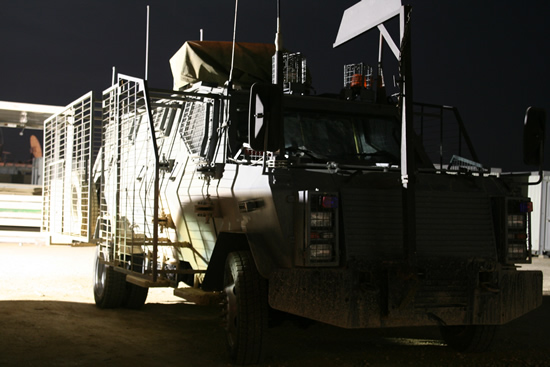 The PMC “mindset” and airsoft

You were introduced to airsoft sometime ago. What’s your impression about the sport and the people who play it?

I have a bit of advice up front. If you have not been a soldier in real conflict no matter how much training and realism you just don’t know. I say this because you can get caught up into thinking you know how it is and that’s just not the case at all.

Besides coming home alive and uninjured in most cases the most outstanding difference between what you are learning and doing is distance. Real weapons reach out there and touch you when you never expect it. Airsoft is great for teaching MOUT or Urban Warfare but when it comes to the field it’s a completely different game altogether.

You think that these airsoft teams are a match for a real close protection team?

Yes, because if the teams are using real military type tactics. In Airsoft competition they could easily beat real teams because you can’t shoot through walls like we can, nor, call in indirect fire. Think about it most of wouldn’t put themselves in the same situations. But, given the same situations you guys are great at what you are capable of doing therefore yes you will be competition for real operators. As I said before I would use these systems as training aids if I were back in the military.