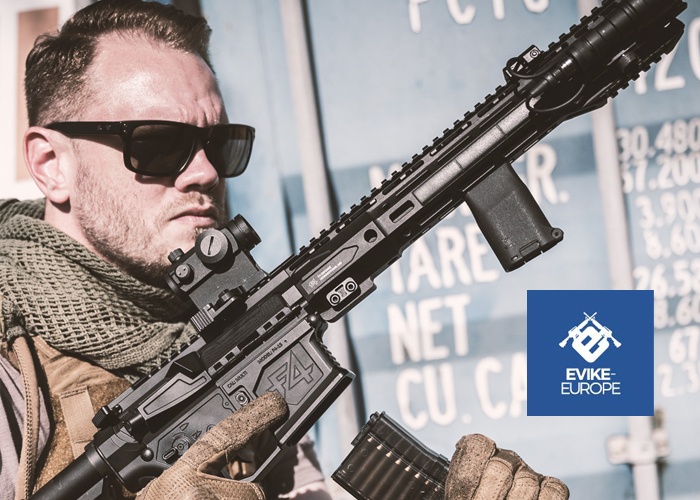 What airsofters in Europe have been anticipating that Evike.com will expand to the Old World, is now here. Evike.com, the largest airsoft retailer in North America has established a big presence in Europe. Whilst Evike-Europe went full blast on the 1st of June, the build-up has been going for sometime now, including the changing of the Airsoft Hub Facebook page which already has over 300,000 followers into the official Evike-Europe Facebook Page.

Evike-Europe is the collaboration between Evike.com and Cybergun, the only publicly listed airsoft company in the world. The companies have been collaborating for years now in the U.S.A. including the releases of airsoft guns under Evike Manufacturing Group (EMG) using the licensing of Cybergun of the various firearms brands it carries for the airsoft market.

Before Evike-Europe was announced, an agreement was forged in between Evike and Cybergun in 2019 which laid down the foundations of European subsidiary as posted on Euronext:

In mid-2019, Cybergun signed a major distribution agreement for the USA with EVIKE.COM giving the latter exclusive rights to distribute Cybergun products in the USA, excluding chain stores and the military market. On the strength of this partnership, which developed faster than initial expectations, the two companies have decided to create a new alliance for the European market.

As such, Cybergun will have exclusive rights to distribute most of EVIKE.COM products on the European market. The US distributor sees Cybergun as a strong player possessing an in-depth knowledge of consumer expectations and a powerful B2C distribution network in France and B2B2C network covering the whole of Europe. 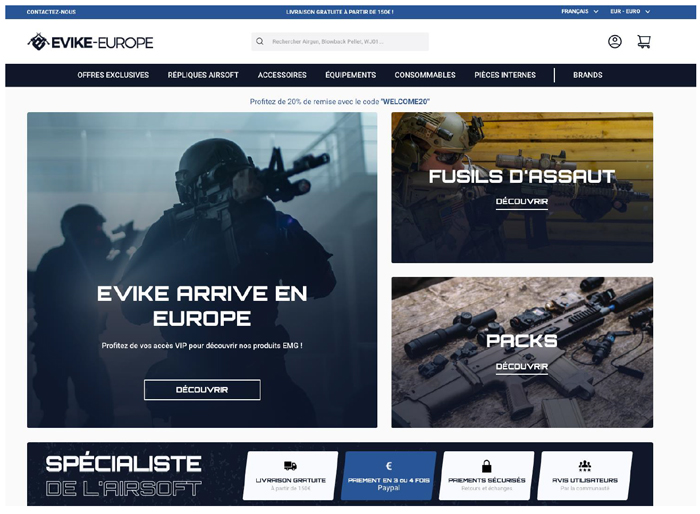 The launch of Evike-Europe should change the European airsoft retail landscape given the brand recognition of Evike everywhere even before the European subsidiary opened. Will it become the dominant airsoft retailer, competing against the likes of RedWolf Airsoft UK, Gunfire, Begadi, and Taiwan Gun which are the most recognised names in airsoft retail and wholesale business in the continent?

With the launch, they are offering customers 10% off their purchases which will end of in two days’ contacted each Friday to be informed that his/her/their purchase will be fully refunded.  As for orders, we assume that these will be fulfilled using Cybergun’s warehousing facilities in France.

An Evike-Europe YouTube Channel has been announced as well.  We’ll finally see a fresh face with Max hosting this channel whilst Matt will continue with the main Evike.com YouTube channel.

The establishment of Evike-Europe means there are more options for the Europe-based airsoft players who are now able to order from Evike without worrying customs duties, especially those in countries that belong to the Single Market, with the exception of Non-EU and Non-EFTA countries in Europe such as the UK.

Having more choices is always good and competition even better as existing retailers will have to perform better to be able to compete against a behemoth like Evike.com.

Press release from Cybergun on the official launch of Evike.com released on the 23rd of May:

CYBERGUN AND EVIKE ARE LAUNCHING EVIKE-EUROPE.COM TO CONSOLIDATE THEIR LEADERSHIP IN THE “CONSUMER” SEGMENT

The CYBERGUN Group, a global player in recreational shooting, and the EVIKE Group, the American leader in the design and distribution of compressed air (“Airsoft”) gun replicas, announce the launch of their new merchant site: www.evike-europe.com.

After several months of work in close collaboration between the two groups and 1.6 MEUR of developments recorded by CYBERGUN in current operating expenses in 2021, Evike-europe.com will establish itself from its launch as the largest European airsoft catalog in B2C (direct sale to consumers) with nearly 10,000 references available from the CYBERGUN and EVIKE catalogs. The high availability of products will be an asset thanks to a direct connection with the stock of CYBERGUN in France and EVIKE in the United States. Evike-Europe.com will benefit from its launch from the power of the EVIKE brand, which is today the undisputed and undisputed world leader in the sale of Airsofts by the number of references and turnover. All EVIKE customers located in Europe will be automatically redirected to the Evike-europe.com site.

After an initial pre-opening phase reserved for a few customers of the two groups, the Evike-europe.com site, available in French and English, will be accessible to the public from May 30, 2022. Initially available in English and French, the site will be gradually translated into 4 new languages ​​in order to reach as many European consumers as possible.

The CYBERGUN group, which will consolidate the results of Evike-europe.com, is aiming for a turnover for its B2C division (sales in stores and on the Internet) of 4 MEUR this year, 8 MEUR in 2 years and 15 MEUR in 5 years, compared to 2 MEUR in 2021, with a commercial margin rate of around 40%.

A NEW KEY STEP IN THE PARTNERSHIP BETWEEN TWO LEADERS

This launch is a natural extension of the agreement concluded in the summer of 2020 between CYBERGUN and EVIKE. In this context, CYBERGUN has been entrusted with the exclusive distribution of the majority of the EVIKE product range on the European B2B market (sale to professionals). The American company saw in CYBERGUN a major player capable of providing a perfect knowledge of consumer expectations and a powerful direct (B2C) distribution network in France and indirect (B2B) throughout Europe.

For the record, CYBERGUN and EVIKE announced in April 2022 a partnership for the distribution of “consumer” products in the United States which resulted in the entry of EVIKE to 49% in the capital of SAUSA and PALCO, the two American subsidiaries of CYBERGUN dedicated to the American market.

For its part, CYBERGUN confirms its ability to extend and strengthen its positions in all strategic segments of the world of shooting, whether in the civilian field (replicas for leisure shooting sold in B2C and B2B) or military (replicas for force training, simulators, handguns).

"The strategic alliance between CYBERGUN and EVIKE takes on a new dimension today with the launch of Evike-europe.com. After having capitalized on the leadership of our partner in the United States and having learned to work together, we are going a step further in our approach in Europe with a website in the colors of EVIKE and piloted by the CYBERGUN group."