Tom Clancy fans just have a week’s worth of waiting for the premiere of the “Without Remorse” film, the origins film of John Clark who is the second most famous Tom Clancy character after Jack Ryan. The film will stream on Amazon Prime Video on the 30th of April.

To commemorate the film adaptation of the character who would later on lead the Rainbow Six international counterterrorist outfit, 5.11 Tactical announce that they are having a Sweepstake Prize Package.

Worth US$2,500 the package is comprised of gear featured in the movie. Since it hasn’t streamed yet, you can have an idea of what these are in the promotional poster below: 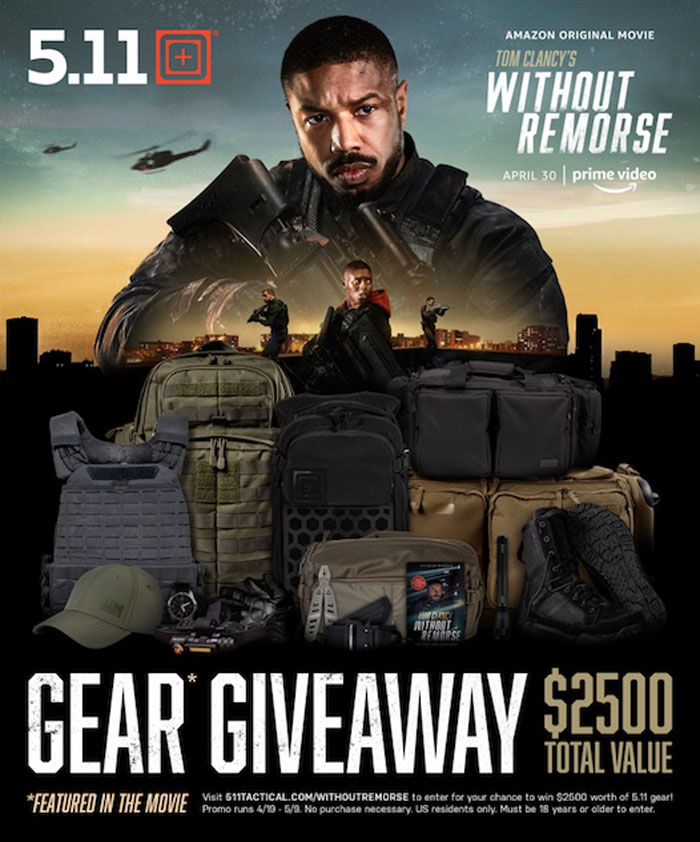 The promo period has started last April 19 and will end on May 9. There is no need to purchase any 5.11 product to join in this raffle with multiple entries possible. Unfortunately, this is limited to U.S. residents who are 18 years of age and above.

5.11 has been supporting the Tom Clancy projects, starting with the Ghost Recon series with the video game company Ubisoft.

Reading the synopsis of the film adaptation, those who are Tom Clancy purist may be disappointed as it is not exactly based on the novel. But with the success of the Jack Ryan series on Amazon Prime Video which is also loosely based on the novels, we hope “Without Remorse” will continue the tradition.
Michael B. Jordan will play the lead role as John Clark and he is joined by Jamie Bell, Jodie Turner-Smith, Brett Gelman, Luke Mitchell, Guy Pearce, Jack Kesy, and Colman Domingo. It is directed by Stefano Sollima and written by Taylor Sheridan and Will Staples.

Press release from 5.11 below:

Irvine, Calif. (April 22, 2021) – 5.11, Inc., the global innovator of purpose-built apparel, footwear, and gear, has teamed up with Amazon Prime Video for a sweepstakes to commemorate the April 30 release of the film Tom Clancy’s Without Remorse starring Michael B. Jordan. The sweepstakes will offer fans a chance to win a custom 5.11 prize package valued at more than $2,500.

Prime Video’s Without Remorse is an action film adaptation of the Clancy novel of the same name. It’s the explosive origin story of action hero John Clark, an elite Navy SEAL, who uncovers an international conspiracy while seeking justice for the murder of his pregnant wife. Clark (played by Jordan) is widely considered one of the most popular characters from Clancy’s celebrated novels.

“This is an exciting program that portrays how professionals like Navy SEALs use our products in the field and gives fans a chance to win some great gear of their own,” said 5.11’s CMO, Debra Radcliff. “We’re thankful of Amazon Prime Video for this collaboration and proud to be a part of another project that brings a Tom Clancy novel to life.”

5.11 has a strong history of supporting Tom Clancy projects previously with video gaming giant, Ubisoft®, on its launches of Rainbow 6 Siege (2015), Ghost Recon Wildlands (2016), and Ghost Recon Breakpoint (2019). In addition to cross-promotional marketing, 5.11’s purpose-built products were featured and integrated into the customization of the characters of these games. Most recently, the brands expanded the partnership to include in-game character customization affecting play in the 2019 Ubisoft game launch of Tom Clancy’s The Division 2.

“5.11’s long-standing track record of providing purpose-built apparel and gear to servicemen and women, as well as their unwavering support of the military, law enforcement and veteran community, made them an ideal fit for our Without Remorse activation,” said Jen Verdick, Head of Partnerships and Consumer Events at Prime Video. “We are excited to have 5.11’s support as we bring Without Remorse to fans across the globe.”

To enter the sweepstakes, or to learn more, visit www.511tactical.com/withoutremorse from Monday, April 19, through Sunday, May 9. Products featured in the robust prize package include a series of 5.11’s latest and most innovative technical packs, luggage and vests, in addition to apparel, footwear and an array of multi-functional accessories from lighting to multitools as well as everyday carry items. No purchase necessary, multiple entries possible, must be 18 years or older and a U.S. resident to enter.